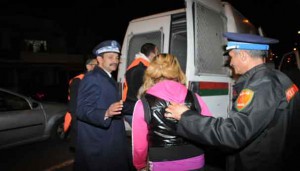 Moroccan police have arrested 10 women who had allegedly pledged allegiance to the Islamic State jihadist group and planned to carry out suicide bombings across the country, authorities said Monday.

The all-female cell had “tried to obtain the chemicals used to make explosive belts” and were planning to attack “vital installations”, the interior ministry said.

The women had built “close relationships with several Moroccan terrorists also affiliated with Daesh (and) based on the Syrian-Iraqi border,” it said, using an Arabic acronym for IS.

The cell was recruiting and training women in several parts of the country including the tourist hotspot of Tangiers and towns close to the capital Rabat, the ministry said.

Rabat says more than 150 “terrorist cells” have been uncovered since 2002, including dozens in the past three years with ties to jihadists in Iraq and Syria.

A study by the US-based Soufan Group said last December that at least 1,200 Moroccans had traveled abroad to fight alongside IS in the previous 18 months.

However, the kingdom, which espouses a moderate version of Islam, has largely been spared repeated jihadist violence that has in recent years swept other parts of the region.

But a 2003 attack in the economic capital Casablanca left 45 dead, while a 2011 attack at a tourist site in Marrakesh killed 17 people.