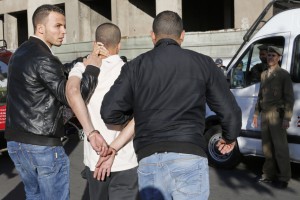 Morocco had arrested eight people suspected of operating a recruitment cell for the Islamic State group in the North African kingdom.

Cell members “secured the transfer of dozens of fighters… in coordination with elements operating on the border between Turkey and Syria,” said an interior ministry statement carried by the official MAP news agency.

The recruits were charged with “carrying out suicide car bomb operations in Iraq and Syria” for the extremist group, the statement added.

The arrests were made by the Central Bureau of Judicial Investigations, a unit formed in March as part of the kingdom’s counterterrorism push.

Morocco has frequently announced the arrest of “terrorist cells” and reported seizing weapons from groups authorities say have pledged allegiance to IS.

According to the British-based International Centre for the Study of Radicalisation, about 2,000 Moroccans are estimated to be fighting with IS in Iraq and Syria.