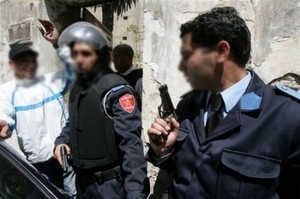 Moroccan police arrested three people with links to the Islamic State (IS) group, the interior ministry said in a statement according to xinhuanet.com.

According to the ministry, the suspects were arrested in the northern city of Martil and El Jadida following investigations with the members of a recently-busted terror cell that was operating in several Moroccan cities.

On Jan. 27, Morocco’s interior ministry announced that security forces foiled an (IS) terror attack during a large-scale anti-terrorism operation.

The operation led to the bust of the seven-member cell in five cities, and the seizure of arms, suspicious products used in manufacturing explosives, and other material used in detonating explosive belts hided in a safe house in the coastal city of El Jadida, some 190 km south of the capital Rabat.

The ministry said initial investigations confirmed the arrested suspects’ involvement in the plans of the busted-cell to set up an IS-linked base under the name of “Islamic State Branch in Morocco” and carry out terror projects.

The cell members intended to meet with an explosive expert from IS branch in Libya to learn about mining and distant detonation techniques, it added.

According to official figures, Morocco busted 19 terrorist cells and arrested 273 suspects in 2016, most of them linked to the group, which control large swaths in Syria and Iraq.