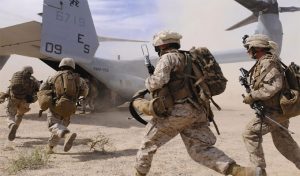 The Moroccan-US joint military training, known as the African Lion Manoeuvres 2018, have been launched in Morocco under the orders of King Mohammed VI and will continue until April 29, like reported by middleeastmonitor.com.

A statement which has been issued by the General Command of the Royal Moroccan Armed Forces on Tuesday said that “Military units and observers from 15 countries representing Africa, Europe and North America are participating in the 15th session of these military trainings. The matter concerns Germany, Canada, Spain, France, UK, Greece, Italy, Burkina Faso, Chad, Egypt, Mali, Mauritania, Senegal, Tunisia, as well as the United States of America and the Kingdom of Morocco.”

The statement explained that “The military training will include ground, air, airborne and tactical simulations trainings.”

The statement added that: “The military training will also include a formation in leadership activities and training on operations against violent extremist groups.”

According to the same source, “as part of the civilian military activities that are organised in parallel with the military trainings, dental medical services will be provided for the local population, in Tiznit, by medical teams involving doctors and nurses from the Royal Moroccan Armed Forces and the US Army.”

On the sidelines of the 2018 session of the African Lion Manoeuvres, a Moroccan-US air and naval manoeuvre is expected to be carried out, under the name of ‘Lightning Handshake in the Atlantic Ocean’ all along the Moroccan coasts.

According to the Moroccan newspaper Lakome on Tuesday, the frigate of Mohammed VI, the US aircraft carrier USS Harry S. Truman, as well as war planes from both countries will especially participate in the Lightning Handshake manoeuvre.

The African Lion Manoeuvres and the Lightning Handshake air and naval manoeuvre are aimed at strengthening expertise and experience and strengthening cooperation and operational control among various forces.

The African Lion Manoeuvres are joint military training which have started in 2007 between the United States of America and the Kingdom of Morocco in the Tan-Tan Province of Morocco.

These training are aimed at strengthening military relations between Morocco and the United States of America and developing the field and combat skills of the participating forces.

They are also aimed at training in various terrains including desert, plateaus, valleys, stripes and areas close to the sea, that simulate the total terrains of the Sahara region and the majority of Arab countries.

The 2013 training programme was cancelled by Morocco in response to Washington’s efforts to submit a draft resolution to the Security Council to expand MINURSO’s mandate to include human rights monitoring in Moroccan Sahara and the Tindouf camps.

However, the US embassy in Rabat announced that the training resume after a UN settlement was reached.

The African Lion Manoeuvres come in this year amid an escalation between Morocco and the Polisario Front in the buffer zone in the Sahara, after Rabat accused the Polisario of trying to “change” the reality in the buffer zone, which is under the control of the United Nations, through transferring its military, administrative and civilian centres from Tindouf camps to the region.