You are here: Home / Mediterranean / Moroccans reject fanatical Saudi Imam ‘Mohamed Al-Arifi’ due to his calls for jihad against the Shia Muslims & supporting ISIL 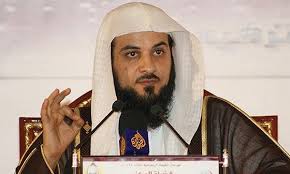 Saudi Sheikh Mohamed Al-Arifi announced on his Facebook page, that he decided to postpone his upcoming lecture in Morocco, scheduled for October 25 in Rabat. The annulation came apparently after a massive wave of critics by Moroccan intellectuals to the invitation addressed to Arifi by a Moroccan association. According to many posted views and opinion, the controversial Saudi Sheikh was unwelcome because of his fanatical worldview and his frequent calls for jihad, holy war, especially against the Shia Muslims, and his support to the ISIL and al-Qaeda.

The Moroccan writer Salah El Ouadie has expressed in a column published by many media outlets in Arabic and French, his complete rejection against the supposed visit of the clerical sheikh.

Salah El Ouadie voiced that rather than claim banning the cleric from visiting Morocco, he prefers to ask those who invited Arifi, as Moroccans involved in the present and the future of their country, “to fully shoulder responsibility for their act, before the law and the national collective consciousness, in the interest of Moroccan generations to come.”

The Moroccan columnist inquired the inviting NGO to wonder whether Arifi’s visit would have served Morocco or been useful to Morocco and Moroccans in any way. He added that no one would have paid attention to the issue, if the man invited was a theologian preaching a moderate and tolerant Islam and not an extremist known for his stances, initiatives and calls that represent a clear threat to our country, and more particularly to Moroccan youths, on all fronts and at all levels.

“Also, is it wise that we receive on our land an individual who does not hesitate to set Muslims against each other, by his imprecations and incitements supporting ISIL  followers in Syria?” Salah El Ouadie wrote, quoting one of Arifi’s statements vowing moral and material backing to the Islamic State group’s fighters.

The controversial Saudi Imam is banned from visiting several countries, including Qatar and Switzerland, for holding extreme views. In March 2014, the British Home Office excluded him from the United Kingdom and banned him from returning to the European country after a series of sermons in Cardiff, Birmingham and London.

In his native country, he has been expelled from the University where he was teaching and in October 2014, he was jailed for 40 days for stating that the train linking Mecca and other holy sites was “one of the worst in the world.” He has also been arraigned in 2013 for interfering in Egypt’s internal affairs.