You are here: Home / Mediterranean / Moroccan salafist threatened with death for refusing to be ISIS’ Mufti in Morocco 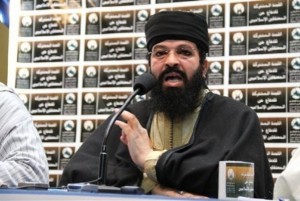 Moroccan Salafist, cheikh Abou Al Fadl Omar Haddouchi, claimed that he received a ‘very high’ offer from the Islamic State to be their “official mufti,” in Morocco. He said ISIS offered him huge sum of money in return but he refused.

Omar Haddouchi,  who was released from prison by royal pardon after having received heavy sentences for being implicated in the Casablanca bombing of 2003, said he has been the target of murder threat from ISIS over turning down the offer.

Sheikh Omar Haddouchi, considered the most hard-liner Salafist, refused to switch his allegiance from al-Qaeda to Abu Bakr al-Baghdadi’s group. He has fiercely attacked IS on several occasions and mocked its declaration of a caliphate, calling it a “mockery.”

In a recent interview with Kuwaiti daily Al Ray newspaper, Haddouchi said his constant attacks against the Islamic State prompted ISIS to announce him an ”unbeliever” or kafir and issued a death threat against him.

“I was among the firsts who warned against the danger of ISIS,” Haddouchi said, adding that he urged the organization to treat people “nicely and not harshly.”

In 2013, Omar Haddouchi issued a fatwa to young people in Morocco and Tunisia, urging them not to travel to Syria because of the emotional and financial damage their move would cause to their loved ones left behind.

In his attempt to demonstrate the illegitimacy of any allegiance made to IS “caliph” Abu Bakr al-Baghdadi, Haddouchi quoted a hadith of the Prophet that says: “anyone pledging allegiance to a stranger without approval from, or consultation with, the entire Muslim community, is eligible for the death penalty.”

The Salafist cheikh told Al Ray that ISIS’s so-called Caliphate will fail “because most Jihadists who were recruited are westerners who don’t even speak Arabic, while the others who came from Arab countries are ignorant and know nothing about Islam.”