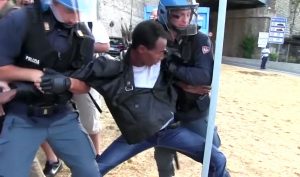 An Italian court sentenced a Moroccan citizen to four years in prison for planning a terrorist attack on a shopping centre in the north of the country.

State television reported that “the criminal court in Milan found Nader Ben Charafi, 30, guilty of preparing for a terrorist attack for Daesh in a shopping centre in a town near Milan where he used to work.”

Italian police arrested Ben Charafi in December following messages they intercepted on the private messaging service Telegram which he had sent to fighters in Daesh, in which he had announced his readiness to carry out an attack in Italy.

During investigations, it was also revealed that he had donated funds for jihadist activities outside Italy.

Ben Charafi will be deported from Italy after serving his sentence.

Since the beginning of this year, Italian authorities have deported 57 people on public security grounds compared to 189 people since 2015.