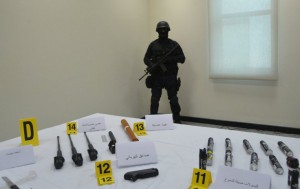 Alleged members of an Isis cell arrested in Morocco in February were plotting a biological weapons attack, authorities said.

“Some of the seized substances (from the suspects) are classified by international organizations which specialize in health issues as falling within the category of biological weapons dangerous for their capacity to paralyse and destroy the nervous system and cause death,” the interior ministry said.

“Members of the terrorist cell had prepared these deadly substances with a view to using them in their terrorist projects inside the kingdom,” it said in a statement, AFP reported.

The 10 member cell, which included a French national, was arrested by Moroccan authorities on February 18. Members were arrested in several towns in Morocco. Their identities have not been revealed by authorities.

Several thousand Moroccans are believed to have travelled to Iraq and Syria to fight for Isis, with Moroccan authorities claiming to have busted 31 Isis cells planning attacks in the country in the last three years. In January, the group released a video urging followers to commit a ‘Paris style’ attack in Morocco, which welcomes millions of tourists annually.