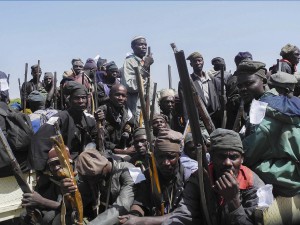 The terrorist group has recently resorted to burning villages, looting food and cattle, using suicide bombers and slaughtering their victims. The latest attack was Sunday.

Young men armed with machetes and knives are joining together to protect the town of Kolofata on Cameroon’s northern border with Nigeria from Boko Haram insurgents. They are responding to calls by Cameroon’s Defence Minister Edgard Alain Mebe Ngo’o for more vigilante committees to be created.

“Boko [Haram] is becoming a serious nuisance, menacing the population more than ever before with the use of suicide bombers, burning and looting. I am asking all Cameroonians especially in border zones to be members of vigilante committees and collaborate with the military to make sure that this new forms of Boko Haram attacks are stopped,” said Mebe Ngo’o.

The plea came after suicide bomb attacks that left 9 people dead and 24 wounded in Kolofata. The governor of Far North Cameroon Midjiyawa Bakari said there should have been more casualties but a local vigilante group detected two male teenagers and a 12 year old girl, all suicide bombers.

“I am congratulating the vigilante committee whose courage reduced the shock of the Boko Haram attack and I am inviting every one to emulate their example. The government’s message for everyone to contribute in crushing the terrorist group is being adhered to and Cameroon’s president Paul Biya is happy,” said Bakari.

Kolofata, has been repeatedly targeted by the Nigeria-based Islamic extremist group. Ahmidou Fouman said that is the reason he joined one of the vigilante committees to report all suspects and watch out for strange faces visiting their town.

“The latest success story we had was on Sunday when we detected two strange teenage boys and a girl dressed like a Muslim in our town. They pretended to be fetching water from a stream and when some members of our group went to search them, the girl detonated a bomb killing some of us. Many more people would have died should the suicide bombers have had access to the market, church and mosque they targeted,” said Fouman.

Attacks on the rise

In the seven attacks reported in recent days, 24 people, including 15 assailants, were killed, 40 injured and 15 attackers arrested.

The assailants were killed as the attempted to seize the military base at Balgaram near the northern border with Nigeria. Cameroonian soldiers said they captured 15 others and seized guns. The low amount of ammunition seized suggests that supplies are running low since Cameroon, Chad, Nigeria, Benin and Niger started blocking possible supply roads.

In other villages the attackers stole hundreds of cattle and food. Residents say the assailants had guns with no ammunition but used knives and swords to kill or wound their victims.

The attack came one day after Major General Iliya Abbah, the Nigerian commander of a five-nation regional force set up to fight Boko Haram, concluded a visit to the Mora military base in northern Cameroon, where 2,500 troops are installed. The force is headquartered in Chad and will draw on troop contributions from Nigeria, Chad, Cameroon, Benin and Niger.

The Nigerian general described the wave of attacks that have rocked the area of late as the last kicks of a dying horse. He also invited the public to assist soldiers in the fight as the attackers have now resorted to burning houses and stealing for survival.

Jimam Lar, a junior fellow at Bayreuth International Graduate School of Social Sciences, believes that such vigilante groups could prove vital in the fight against Boko Haram if there is proper supervision on the part of the government.

“The army is trying to mobilize the population to support their efforts,” said Lar. “They are very critical in terms of local information and collaboration with the state.”

Lar believes it is too early to know whether or not these groups will have continued success as they did over the weekend. But he stressed that is not the job of such groups to fight Boko Haram.

“The primary responsibility of fighting an insurgency is that of the armed forces,” said Lar.