You are here: Home / MidEastGulf / More US, French troops deployed to Syria’s Manbij 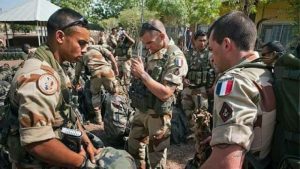 US and France have deployed more troops from the American military base in Kobani to the Syria’s town of Manbij a report said, like reported by basnews.com.

According to Yeni Şafak, the convoy was made up of ten Humvees, radar and communication equipment, long-range missile launchers, and medium weapons, adding that the two countries’ warplanes were reportedly on alert to fly to the Kurdish-held town of Manbij.

Turkey and its backed Free Syrian Arm (FSA) Launched a military operation against the Kurdish forces in the Kurdish encalve of Afrin in Syria in January 20. After taking over the region in mid-March, Ankara threatened to extend the operation to Manbij.

The US has been backing the Kurdish forces in the battle against the Islamic State (IS) in Syria.

Turkey views the Kurdish forces as an extension of the Kurdistan Workers’Party (PKK), and armed group which designated as ‘a terrorist organization” by the country.

There a three-decade conflict between Turkey and the PKK over political disputes.