You are here: Home / MidEastGulf / More U.S. troops may be sent into Syria to fight ISIS 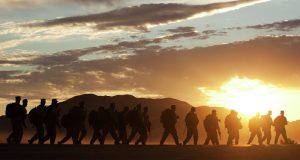 Gen. Joseph Votel, the commander of American forces in the Middle East, said Wednesday that in order to maintain momentum in the push to liberate the Syrian city of Raqqa from the ISIS militants who have made it their de-facto capital, the U.S. might “take on a larger burden ourselves”, like reported by cbsnews.com

Asked by CBS News if  more U.S. troops would be sent into Syria, Votel responded, “perhaps,” and went on to explain that the local forces the U.S. is supporting in Syria “don’t have as good mobility, they don’t have as much firepower, so we have to be prepared to fill in some of those gaps for them and that may involve additional fire support capability, a variety of other things that we bring in to help offset some of the gaps that they have and we take the burden on ourselves for that aspect of the fight.”

Votel spoke to a small group of reporters accompanying him on a trip to the Middle East, shortly before the Pentagon is due to present President Trump with a plan for accelerating the defeat of ISIS in both Iraq and Syria.

He stressed that the Pentagon was not considering sending American combat troops to take over the fighting in Syria and that the strategy developed during the Obama administration of keeping local forces in the lead would not change.

He added, however, that he is “very concerned about maintaining momentum,” suggesting he’s not willing to wait for enough Arab fighters to be recruited, trained and armed to liberate Raqqa. Instead, he raised the prospect of American troops providing logistics assistance and fire support in the form of artillery to Syrian opposition fighters, much as U.S. forces already do in Iraq — a nation with a more developed army of its own.

Lt. Gen. Steve Townsend, the commander of the campaign against ISIS in Iraq and Syria, and one of Gen. Votel’s key subordinates, recently predicted that both Raqqa and Mosul, the twin ISIS capitals in Syria and Iraq, would be liberated within six months.

Eastern Mosul has already been liberated after a 100-day battle in which Iraqi security forces suffered heavy casualties, and the operation to liberate western Mosul began over the weekend.

Gen. Votel said the Iraqi forces were making rapid gains on the southern outskirts of the city but that, “the real test will be once we get into the city itself,” where the streets are narrow, the houses densely packed and ISIS has had months to prepare its defenses. The battle will be complicated further by the presence of an estimated 700,000 civilians trapped inside the city.

We “can’t just go pell-mell through there,” he said.

Over the weekend, Lt. Gen. Townsend revealed that the 450 American advisers working with the Iraqis in Mosul have moved closer to the front lines in order to stay in touch with Iraqi commanders as they advance on the city.