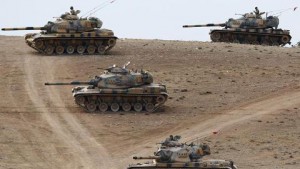 At least nine more Turkish tanks entered northern Syria on Thursday as part of an operation aimed at driving Islamic State out of the border area around Jarablus and stopping Kurdish militia fighters from seizing territory, Reuters witnesses said.

A senior Turkish official said there were now more than 20 Turkish tanks inside Syria and that additional tanks and construction machinery would be sent in as required.

“We need construction machinery to open up roads … and we may need more in the days ahead. We also have armored personnel carriers that could be used on the Syrian side. We may put them into service as needed,” the official said.

The deployments are part of “Operation Euphrates Shield”, in which Syrian rebels backed by Turkish special forces, tanks and warplanes on Wednesday entered Jarablus, one of Islamic State’s last strongholds on the Turkish-Syrian border. It is Turkey’s first major U.S.-backed incursion into its southern neighbor.

President Tayyip Erdogan said on Wednesday the operation was targeting both Islamic State and the Kurdish YPG militia, whose gains in Syrian Kurdistan northern Syria have alarmed Turkey.

Ankara views the YPG as an extension of Kurdish militants who have fought a three-decade insurgency on its own soil, putting it at odds with Washington, which sees the group as an ally in the fight against Islamic State.

Turkey which still denies the constitutional existence of its own Kurds fears the creation of an autonomous Kurdish region in Syrian Kurdistan — similar to the Kurdish region in northern Iraq — would spur the separatist ambitions of Turkey’s own Kurds.

Washington regards the Kurdish YPG, the PYD military wing, as key ally against Islamic State and the most effective fighting force against IS in Syria and has provided them with air support as well as the military advisers. The Kurdish militia has seized swathes of Syria from Islamic State.

He said there should be no separate Kurdish entity in northern Syria and the country should remain united. Kurdish militia fighters would not receive U.S. support if they failed to pull back east of the Euphrates as promised, he said.

Syrian Kurds have established three autonomous zones, or Cantons of Jazeera, Kobani and Afrin and a Kurdish government across Syrian Kurdistan (northern Syria) in 2013.  On March 17, 2016 Syria’s Kurds declared a federal region in Syrian Kurdistan.