You are here: Home / Europe / More than 80 British Islamic State brides could be returning to the UK 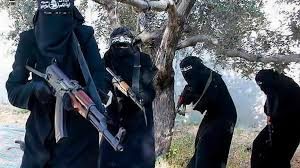 More than 80 British women who married ISIS soldiers could be heading back to the UK, it has been claimed, according to metro.co.uk.

The women are currently being kept in detention camps in northern Syria which are controlled by Kurdish forces who are determined to deport them back home. France this week agreed to accepting 150 children but not their parents and Belgium and Denmark are in talks about bringing back their citizens.

A Sunday Times investigation has revealed among the 80 women who could be repatriated to the UK were part of a deadly terror cell which had links to Jihadi John (Mohammed Emwazi), who performed and filmed executions for ISIS before being killed.

Kurdish leader Abdul Karim Omar who is in charge of repatriation of prisoners claimed a ‘good number’ of the 2,627 men, women and children being held were British. He said: ‘We want to hand them over. We will not let them stay here.’

A British security official said: ‘The vast majority of those returning to Britain from Syria are women and children. The more concerning cases – particularly the men – have not been returning.

‘But we will speak to everyone because they may have been involved in terrorist activity.’ An estimated 900 British terror subjects went to Syria and Iraq during the war and there is believed to be 360 still there.