You are here: Home / Europe / More than 700 “ISIS children” will arrive in France from Syria soon
The children of hundreds of ISIS militants will be returning to France “very soon,” Sylvie Especier, a French official in charge of deradicalisation nationally warned, like reported by express.co.uk 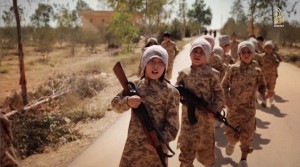 The expert warned many had already arrived from the warzone, she said.

In a conference on countering extremism and radicalisation in Nice yesterday, Mrs Especier said: “Twenty-four have returned home from Syria since September. But hundreds of French minors, an estimated 700, are still in the war zone. It is only a matter of time before their parents bring them home.”

Mrs Especier, a member of France’s Inter-ministerial Committee for the Prevention of Delinquency and Radicalisation (CIPD-R), added more than half of the children born to ISIS militants and their wives were “under the age of five” and that more than one-third were “born in ISIS-controlled territory”.

Once home, the children of returnees – babies as young as two months and teenagers as old as 16 – will be taken into care and looked after by local authorities.

But not all ‘ISIS children’ can be sent into foster care, which is what usually happens when a child’s parents are either dead or in jail, she warned.

She said: “We cannot be naïve. Some of these children have witnessed – or even carried out – brutal executions.

“Some are 13 or older, and could eventually face terror-related charges. They cannot live in a foster home.”

But the fate of the ‘children of ISIS’ remains unclear, and deradicalisation officials are racking their brains for solutions to France’s ‘returnee’ problem.

Mrs Especier said: “We are trying to find a solution that suits everyone. Some of the children are very young. We are considering, for example, opening a shelter for the wives of ISIS militants and their children.”

The children, however, cannot be sent to school “immediately,” the deradicalisation expert said.

She said: “Sending the children to school weeks after their return isn’t always possible. These children have been separated from their families, and their mothers are most probably in jail.