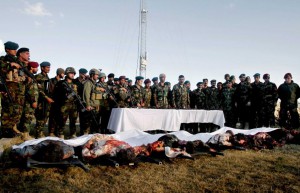 More than 60 people have been killed following the Kandahar airport siege that started late Tuesday and lasted for more than 24 hours, said an official on Thursday.

He said 38 civilians, including women and children, 10 Afghan army soldiers, 2 Afghan police, and 11 attackers were killed.

The last survivor was killed after he took women and children hostage on the third floor of the army family residences, according to two sources at the airfield who requested anonymity.

It was unclear whether any of the hostages were among the death toll. Another source said the third floor was on fire after the final standoff with the last assailant.

“There will be an investigation,” said General Daud Shah Wafadar, commander of the 205 Afghan national army corps stationed in Kandahar airfield.

More than 2,000 international troops stationed at the airfield did not get involved in the battle, which was centered some distance away from their barracks in a residential sector, said Michael Lawhorn, a spokesman for the ISAF Resolute Support mission in Afghanistan.

Afghan President Ashraf Ghani said in Islamabad on Wednesday that he was ready to seek peace with those elements of the insurgents that lay down their arms and participate in a democratic process.

“Violence is not the way in a democratic society,” the Afghan leader said on opening the Heart of Asia conference with Pakistan Prime Minister Nawaz Sharif.

Further west in Herat province, Taliban infighting in Shindand district had been going for three days as of Wednesday, a local official said.

“We have reports of more than 100 people killed and 27 others wounded from both sides,” Herat provincial police spokesman Abdul Rauf Ahmadi said.