You are here: Home / Africa / More than 300 children abducted by islamists Boko Haram last year are still being held

It is unclear whether the Nigerian government has made any serious efforts to liberate 400 women and children abducted by Boko Haram from a school in Borno State a year ago, according to Human Rights Watch. 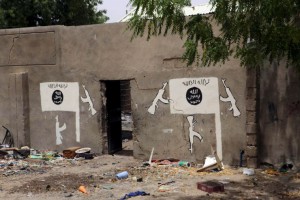 The November 2014 abduction in Damasak was the largest documented by Boko Haram, with at least 300 elementary students captured. However, the event has attracted far less attention from the media and government than the Chibok school abduction in April 2014.

“Three hundred children have been missing for a year, and yet there has been not a word from the Nigerian government,” said Mausi Segun, Nigeria researcher at Human Rights Watch (HRW).

“The authorities need to wake up and find out where the Damasak children and other captives are and take urgent steps to free them.”

On 25 November 2014, Boko Haram attacked the trading town of Damasak, Borno State, blockading the town and trapping residents and traders. The militants took control of a primary school, locking over 300 students aged 7-17 inside, a teacher told HRW. The school was then used as a military base, and militants abducted more women and children from the town.

“It was early morning when I heard gunshots and chaos. My husband had already left home for the market so I grabbed my two children, a boy age four years and a girl age two years, and ran,” a woman told HRW in February 2016.

“But we ran into Boko Haram and they detained us in the middle of the town. They brought more and more women and children to where we were kept. Then they took all of us to Zanna Mobarti Primary School… I have not seen my children since then.”

In the weeks following the attack, scores of bodies were dumped into a nearby river and makeshift graves.

Of those who did attempt to escape, many were turned back by Nigerian soldiers at check points, according to HRW, as they were suspicious that insurgents might be concealed among those fleeing.

“The soldiers turned people back to Damasak. They would not allow you to leave, and if you tried, [the soldiers] would smash your car and burst your tires. So you had to look for another way out around the town or [try to cross] the river, if you can swim. It was terrible,” a farmer who attempted to escape told HRW.

In March 2015, Damasak was liberated from Boko Haram by soldiers from Niger and Chad. However, the miltants fled, taking with them 300 children and roughly 100 women.

None of these children have been returned. There are unconfirmed reports that some of them have been seen with Boko Haram near the Nigerian border with Chad.

“Boko Haram leaders should immediately release everyone the group has abducted, cease all attacks on civilians, and stop using schools in support of its military efforts,” said Segun.