You are here: Home / Africa / More than 120 killed in fighting between Somalia army and former allied group 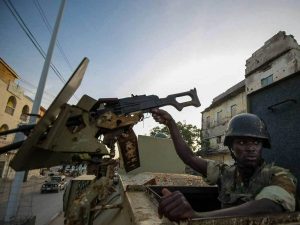 At least 120 people died and over 200 were injured in intensified fighting between the Somali National Army and its former ally Ahlu Sunnah Wal Jama’a (ASWJ) in the Somali state of Galmudug over the weekend, residents and hospital officials said.

The clashes, in the state’s second-largest district of Guriceel, run the risk of distracting both groups from their fights against Al Shabaab, analysts and residents said.

This round of fighting broke out early Saturday and continued into Sunday, residents told Reuters.

“I am sure over 30 people died because I know 27 of them and they belong to both groups,” elder Farah Abdullahi told Reuters. His estimates were echoed by 10 residents interviewed individually by Reuters.

Both the army and ASWJ were not reachable for comment.

ASWJ is a group of moderate Sufi Muslims which has played a key role in the fight against the al Qaeda-linked al Shabaab insurgency.

But tensions between the armed group and the federal government have been building for years. ASWJ accuses the government of not doing enough to fight Al Shabaab, while the government accuses ASWJ of acting without its permission.

Tensions came to a head earlier this month, when federal forces launched what it called a preemptive attack on ASWJ. ASWJ repelled the attack and captured Guriceel, whose residents welcomed the group. L8N2QX3SH

The dead from the weekend’s fighting include senior SNA officer Abdi Ladiif Fayfle, the commander of the U.S.-trained Danab forces, a relative told Reuters.

The SNA also airlifted a plane of injured soldiers to the capital, an airport worker told Reuters.

“Many parts of Galmudug and the entire country is under al Shabaab. The commander of SNA is destroying Guriceel town and massacring ASWJ who are famous for eliminating Al Shaabab,” he told Saturday.

“The escalation of the dispute between ASWJ and the government distracts from, if not undermines, other priorities like progressing with elections and the struggle against Al-Shabaab,” said Omar Mahmood, Somalia analyst at the International Crisis Group think-tank.