You are here: Home / Mediterranean / More than 100 killed in Islamic State’s Libya stronghold 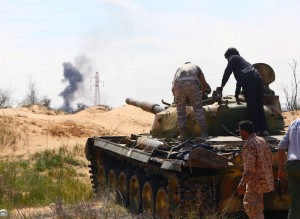 At least 106 people have been killed in three days of fighting between Islamic State loyalists and local tribesmen in Libya’s city of Sirte, the Dubai-based broadcaster Al Arabiya reported on Friday citing an unnamed local official.

Most of the dead were members of the Ferjan tribe who refused to pledge allegiance to the radical organization, according to the report.

Islamic State insurgents Friday torched a makeshift hospital in Sirte’s so-called District No 3, which has been besieged by the militants since Wednesday, Al Arabiya said. No casualties were reported.

The violence erupted after the body of Sirte’s prominent Muslim cleric, Khaled bin Rajeb, was found in a suburban area of the city. Fighters from Islamic State are believed to have killed the cleric for refusing to pledge allegiance to the extremist militia.

In an online statement, he called on the United Nations to lift an arms embargo imposed on Libya after the 2011 uprising against Gaddafi.

Islamic State established a foothold in Sirte earlier this year and has since expanded in the Mediterranean city, taking advantage of chaos in the oil-rich country.

Libya is divided between an elected government based in the eastern city of Tobruk and an Islamist-backed government in the capital Tripoli.

The unrest has prompted several countries to withdraw their citizens and diplomats from Libya.