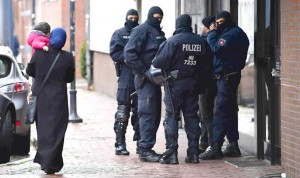 Yet another two “legal immigrants from Morocco”, both with German citizenship, have been arrested on terrorism charges after returning to Germany, having fought for ISIS in Syria, like reported by independent.mk.

Federal prosecutors said this week that two brothers, named as Rachid B. and Khalid B., had been arrested in the greater Bonn area. Both were active members of ISIS and, before that, the al-Nusra Front in Syria.

Rachid B. travelled to Syria in February 2013, going through Egypt and Turkey, to join the al-Nusra Front, prosecutors said. In Syria, he received shooting, combat and weapons training, and was given an assault rifle as well as ammunition.

In May of that year, Rachid B. left the al-Nusra Front and joined ISIS, keeping his assault rifle. With ISIS, he was trained in shooting and combat missions, and also held guard duty, according to prosecutors.

During this time he stayed in touch with his younger brother Khalid B. and advised him on which route to take to reach Syria.

Khalid B. reached Syria by July 2013 from Germany, and also joined ISIS and received training.

The two brothers then went on a “long holiday in Turkey,” according to a statement from the North Rhine Westphalia Ministry of the Interior, before returning to Germany during 2016.

The two Moroccan invaders, who legally immigrated to Germany many years ago, were arrested after a secret police assault on their residence in the town of Bad Münstereifel, on the outskirts of Bonn.

The 70-strong police assault team used flash grenades during the arrest, and at least one of the Moroccans was in possession of an assault rifle, it was revealed.

Bad Münstereifel mayor Sabine Preiser-Marian said in a statementthat the two brothers “were inconspicuous. They are not part of the group of refugees assigned to us, but have grown up in Germany and are, among other things, German citizens.”