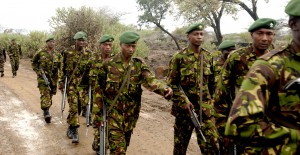 More Kenya Defence Forces (KDF) soldiers have been deployed to the Kenya-Somali border to contain Al Shabaab militants.
Authorities said the militants, who arrive in groups of between five and ten, have been harassing locals in the past week. North Eastern Regional Co-ordinator Mohamud Saleh said the area is difficult to man and patrol because of heavy rains and bad roads but they are deploying more personnel and equipment. “We are even using choppers to patrol and drop off personnel to deal with the menace.
The militants are escaping sustained attacks by Amisom inside Somalia and have been sighted near the border now,” said Mr Saleh. At the weekend, locals in Konton, Wajir East, said about ten gunmen raided the village and held them hostage demanding food and water.  The militia are said to have crossed over from Somalia and allegedly mounted the black Al Shabaab flag in a local chief’s office before proceeding to lecture the locals for a while.
Meanwhile, KDF has joined the Anti-Terrorism Police Unit (ATPU) in a new drive to scale down human trafficking from Ethiopia. The soldiers from the School of Infantry were deployed to the Isiolo-Nairobi road on Friday and Saturday in what security sources said was aimed at netting aliens being trafficked through the country by cartels based in Kenya. Security alert The Kenyan traffickers, describing themselves as businessmen operate in Moyale, Marsabit town, Laisamis, Isiolo and Nairobi. The national government has issued an alert for the police to arrest key cartels who are involved in the multi-million-shilling human smuggling exercise.
To smuggle a person between Moyale and Nairobi costs an average of Sh50,000 according to Government sources.
Over the last week, more than 1,000 Ethiopian aliens have been arrested along the Isiolo-Moyale road and 200 were repatriated. Isiolo County Investigation Officer David Cheruiyot said on Monday last week, that 131 Ethiopians were arrested at Archers Post where they were taken to court and charged with being in the country illegally. The suspects are remanded at Isiolo GK Prison.
standardmedia.co.ke