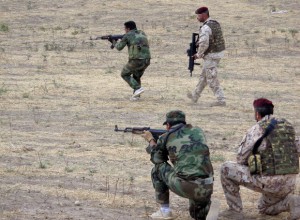 In a meeting with the Kurdistan Regional Government (KRG) Prime Minister, Nechirvan Barzani, the Italian Ambassador to Iraq, Marco Carnelos, promised that his country will continue providing military aid and training for the Kurdish Peshmerga forces.

Carnelos, accompanied by a diplomatic and military delegation, met with Barzani in Erbil.

Highlighting the role of KRG and Peshmerga forces in hosting over 1.8 million refugees and IDPs as well as effectively fighting the Islamic State (IS) militants in Northern Iraq, the Italian envoy revealed that his country has decided to send more military advisors to train larger groups of Kurdish forces in the Kurdistan Region.

The KRG PM thanked the Italian government for supporting the Kurdistan Region, and said that Erbil is willing to strengthen its bilateral relations with Rome.

The pair also discussed the latest developments on the frontlines against IS as well as prolonged disputes between Erbil and Baghdad.