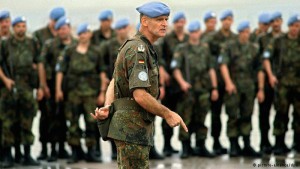 The government is to expand its engagement in terms of the number of police officers it provides for important UN missions. German contingents are to be doubled in South Sudan and Mali, while German police officers are to be seconded to Somalia and Haiti for the first time in an effort to support peace processes in these countries.

Strengthening the United Nations remains an important foreign-policy concern of the German government. UN missions around the world are making an indispensable contribution to creating and maintaining peace and security.

Organised crime is a serious threat to security and stability in Mali and in neighbouring countries. Cross-border crime also bankrolls terrorist networks in the Sahel.

For this reason, the German government has decided to step up its contribution to the police component of the United Nations Multidimensional Integrated Stabilization Mission in Mali (MINUSMA). To date it has been possible to deploy up to ten police officers. This figure is now to be doubled to 20. Germany’s engagement is to be enhanced in terms of quality, as well as quantity. A team of four to six specialists is also to be seconded to train the local police. The team will comprise specialists in the fields of organised crime, cross-border crime and anti-terrorism.

In response to a UN request, the number of German police officers involved in the United Nations Mission in the Republic of South Sudan (UNMISS) is also to be raised from 10 to 20. This mission has strong military, police and civilian components. German troops are also deployed in South Sudan, so that the police component once again rounds off the overall German engagement.

The security situation in parts of the country has deteriorated dramatically, and the humanitarian emergency has worsened. Currently almost 200,000 internally displaced persons are being cared for by UNMISS facilities in South Sudan. The scale of conflict-related violence, particularly towards women and children, is giving grounds for serious concern.

For this reason the mission would like to use a team of specialists to tackle the field of sexual and gender-based violence exclusively and in the longer term. For this team the UN has requested German expertise in particular. Germany has earned itself an excellent reputation in this field, and has specially trained police officers for this area.

Somalia is facing developments that will be crucial in determining its future. Next year it is to hold parliamentary and presidential elections. Then it will become clear whether or not the country can continue along the path it has chosen towards security and stability, state building and good governance.

German police expertise can make an important contribution towards stabilising and developing Somalia. Up to five police officers can be assigned, under the decision taken by the German government. Soon a German police officer is to take over as head of the police component of the United Nations Operation in Somalia (UNSOM).

The United Nations Operation in Somalia (UNSOM), the central presence of the UN in the country, is a well accepted and much appreciated observer, advisor, coordinator and trainer. UN activities, the EU’s Strategic Framework for the Horn of Africa, and Germany’s Africa policy all dovetail in Somalia.