You are here: Home / MidEastGulf / ‘Moqavamah’ or ‘Resistance’: ISIS fear of Mosul popular uprising, cause mass arrest of 250 iraqi civilians 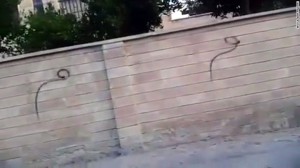 The so-called Islamic State (ISIS , ISIL, IS, Daesh) terrorists went on a house-to-house search in different parts of Mosul and arrested tens of Iraqi civilians, including children, after charging them with spying for the government.

The source reiterated that arresting a large number of civilians by the Daeshcomes as the terrorist group is terrified of an impending popular uprising.

On Sunday, informed local sources in Nineveh province disclosed that the ISIL had blocked the roads leading to Wadi Al Hajr district in the Southern part of the city of Mosul and set up military outposts after the M resistance movement (an opponent group of the ISIL — ‘Moqavamah’ or ‘Resistance’) increased its activities in the region.

The ISIL’s intensified security measures came after the letter M appeared on all walls of al-Hajr district.

The ISIL terrorists are very much fearful of people’s uprising in areas under their control in Mosul city.