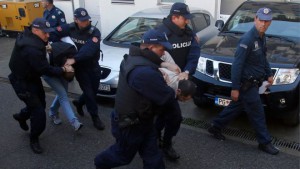 Twenty Serbs have been arrested in Montenegro for allegedly planning to carry out attacks after voting closes in the country’s election, police said.

One Serb was on the run, he said.

The election is taking place amid tension over plans to forge closer ties between Montenegro and the West.

The arrested Serbs have been charged with “forming a criminal organisation and terrorism”, Mr Stojanovic said.

Polls predict the closest race since independence from Serbia and there are fears of violence between opposition and government supporters after the result is announced.

Under Prime Minister Milo Djukanovic the country is pursuing membership of the EU and Nato.

But his Democratic Party of Socialists is being challenged by pro-Russian and pro-Serbian opposition groups.

Mr Djukanovic has said he expects Montenegro to “steadily and dynamically move toward its European and Euro-Atlantic goals” rather than becoming a “Russian colony”.

However some Montenegrins want the country to turn back to its traditional ally Russia.

Many remain angry that Nato bombed Serbia and Montenegro in 1999 as part of a strategy to halt the killing and expulsion of ethnic Albanians in Serbia’s then southern province of Kosovo.

The country has also seen an influx of Russian money, homebuyers and tourists since splitting from Serbia in 2006.