You are here: Home / Senza categoria / Mohammad Youssuf Abdulazeez told Muslims to ‘submit to Allah’ and ‘establish Islam in world’ 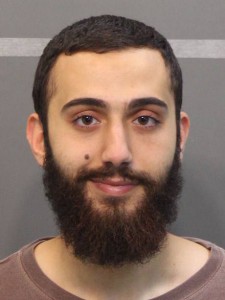 The gunman who killed four US Marines in what is being investigated as a possible incident of domestic terrorism wrote a blog urging Muslims to “establish Islam in the world” days before his attack, it has emerged.

Mohammad Youssuf Abdulazeez, 24, opened fire at two military sites in Tennessee yesterday in a rampage that lasted 30 minutes before he was shot dead by police.

Isis had threatened to step up violence during the holy month of Ramadan but FBI special agent Edward Reinhold, in charge of Knoxville division, said investigators had found nothing that linked the shooter to an international terrorist group.

A blog being attributed to Abdulazeez appeared online days before the shooting, with two posts put up on Monday.

The first, called “A Prison Called Dunya”  – meaning the earthly as opposed to spiritual world – used the metaphor of a jail to illustrate the need for Muslims to study their faith in life to be rewarded in death.

Quoting a Koran passage calling existence “but amusement and diversion” and asking “what is the worldly life except the enjoyment of delusion?”, the blog goes on to quote a hadith calling the world “a prison for the believer and a paradise for the unbeliever”.

“This life we are living is nothing more than a test of our faith and patience,” the author believed to be Abdulazeez wrote.

“Don’t let the society we live in deviate you from the task at hand.”

The blog urged Muslims not to be “fooled by (their) desires”, adding: “This life is short and bitter and the opportunity to submit to Allah may pass you by.

“Take his word as your light and code and do not let other prisoners, whether they are so called ‘Scholars’ or even your family members, divert you from the truth.”

The line appeared to be a reference to Islamic clerics who speak out against jihad and relatives who may have attempted to stop Abdulazeez or other extremists from being radicalised.

The second post on the blog professed to be on “understanding Islam” and used the popular parable of the blind men and an elephant, who cannot understand what the creature is from their limited experience and argue about it, to illustrate differing views of Islam.

“We have a certain understanding of Islam and keep a tunnel vision of what we think Islam is,” Abdulazeez  wrote. “What we know is Islam and everything else is not.”

He claimed that Mohamed’s disciples waged jihad and are an example to be followed.

“We ask Allah to make us follow their path,” he wrote.

“To give us a complete understanding of the message of Islam, and the strength the live by this knowledge, and to know what role we need to play to establish Islam in the world.”

The author of the blog, titled M.Y. Abdulazeez, could not be verified.

Abdulazeez, an engineering graduate who attended the University of Tennessee, was believed to be a naturalised American who was born in Kuwait.

In his senior yearbook from Red Bank High School, near Chattanooga, he wrote: “My name causes national security alerts. What does yours do? -Hijabman”

The FBI named Abdulazeez as the suspect who drove an open-top Ford Mustang to a military recruiting centre at 10.45am on Thursday (3.45pm BST) and sprayed it with gunfire, riddling the glass facade with bullet holes.

He then drove to a Naval Reserve Centre about six miles away, shooting four Marines dead before being killed in a gunfight with police.

Three others were wounded in the attacks, including a police officer reported to be in stable condition and another Marine.

Nihad Awad, national director of the Council on American-Islamic Relations, called the attack “horrific” and condemned it “in the strongest terms possible”.