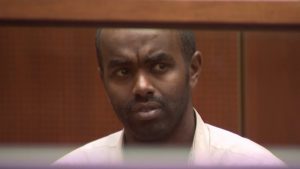 A Somali-born man was charged with a hate crime for allegedly trying to run over two men leaving a Los Angeles synagogue and spewing anti-Semitic insults, like reported by  toi.com.

Mohamed Abdi Mohamed, 32, who was arrested shortly after the incident on November 23, faces two felony counts of assault with a deadly weapon — his vehicle — as well as a hate crime allegation.

Authorities said the two victims — who were not harmed — had just left a synagogue in Hancock Park and were walking on a sidewalk when Mohamed tried to run them over while yelling anti-Semitic remarks.

“He’s yelling out hateful remarks regarding Jewish heritage and regarding these people of faith,” Los Angeles police chief Michel Moore told reporters. “They watch him as he then turns his vehicle directly at them.”

Mohamed was arrested by police shortly after he fled the scene, and then crashed his vehicle into another car.

Prosecutors said Mohamed, a US citizen, lived in the western state of Washington and had been in the Los Angeles area for a short time. It is believed he acted alone and was not connected to a group.

He faces nearly nine years in prison, if convicted of the charges.

The attack comes amid increased concerns about anti-Semitic violence across the United States.