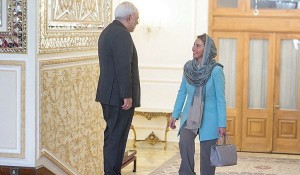 A prominent Syrian analyst underlined that the recent visit by EU foreign policy chief Federica Mogherini to Tehran and her talks on Syria showed that the European block and the NATO have understood that resolving the regional crises would be impossible without Iran’s partnership.

“Federica Mogherini’s visit to Iran and her meeting with high-ranking Iranian officials proved that the EU and NATO have realized that they cannot ignore the positions of the Islamic Republic of Iran which enjoys an important regional status and influential role in resolving the regional crises,” Mohammad Mansour told FNA on Friday.

“Iran concurrently controls the political and battle fields in Syria,” he added.

Mansour said that the interesting point is that the EU is also after bolstering its relations with Iran in light of the current tensions in the region.

In their second meeting, the two high-ranking officials underlined the need for fight against the terrorist groups and the urgency to resolve the Syrian crisis, specially dispatch of humanitarian aid to war-stricken nation.

During the talks, Zarif welcomed the positive role the European Union plays in overcoming the Syrian crisis, and expressed Iran’s readiness to have closer cooperation with the body.

Mogherini arrived in Tehran last Friday night to hold talks with the Iranian officials on regional issues, the question of Syria in particular.

Mogherini also met Iranian President Hassan Rouhani. Her visit to Tehran took place only hours after the Iranian, Russian and Syrian foreign ministers held a trilateral meeting in Moscow last Friday and exchanged views on the latest developments in Syria.

During the meeting with Mogherini, President Rouhani underlined the necessity for cutting aid to the terrorist groups, and called on the EU to use military and political leverage to pressure those states that are supporting the terrorists in the region.

He further warned that terrorist acts in Syria and Iraq mean a major threat to the entire world, and said slow pace in fighting the terrorists in the world will result in the establishment of several terrorist states in the region and North Africa.

Mogherini, for her part, stressed the necessity for campaign against the ISIL and Fatah al-Sham (formerly known as al-Nusra) Front as threats to the world, and said, “The EU needs Iran’s cooperation as a key and important power to resolve problems in the region.”