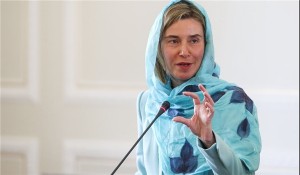 European Union Foreign Policy Chief Federica Mogherini reminded that the 2015 nuclear deal between Tehran and the world powers is a multilateral agreement, stressing that the EU is resolved to stand against any possible violation, like reported by farsnews.com .

“We have made very clear from the beginning, and we will continue to do that, that first of all, one year after its implementation it’s bringing good results to the rest of the world, including the Americans… [and] Europe, and that the European Union is committed to preserve and implement the deal,” Mogherini told Reuters on Wednesday.

She further stressed that the deal is neither unilateral nor bilateral, meaning that it cannot be renegotiated by one party alone.

“So it’s a multilateral framework and we are ready protect and to preserve it,” Mogherini underscored.

Also, earlier this week, Mogherini underlined that the EU will not change its stance and obligations with regard to the nuclear agreement also known as Joint Comprehensive Plan of Action (JCPOA).

“The European Union will remain committed to the nuclear deal and work to ensure the proper execution of the JCPOA,” Mogherini said on Monday ahead of a meeting of EU foreign ministers in Brussels.

The EU foreign policy chief reiterated that the European countries will continue to work for the respect and implementation of the nuclear agreement which is extremely important.

She underlined that the bloc is committed to the accord.

Her remarks came after Iranian Deputy Foreign Minister Seyed Abbas Araqchi underlined that the nuclear talks with Washington have ended and the nuclear deal is no more open to renegotiation.

“Except some technical issues, we don’t have any negotiations with the Americans on the Joint Comprehensive Plan of Action and the future of the agreement,” Araqchi told reporters in a press conference in Tehran and after talks in Vienna with the negotiators from the six world powers over the latest developments with regard to the nuclear deal.

Noting that the new US president can make any decision he wants about the nuclear deal, he said, “The JCPOA will not be open to negotiations at all.”

“Our nuclear talks with the US have ended. We will not enter political negotiations with neither the current nor the future US administration. The JCPOA is a finished case in our view,” Araqchi stressed.

He also said that Iran views the extension of Iran Sanctions Act (ISA) by the US as a new sanction and violation of the JCPOA.