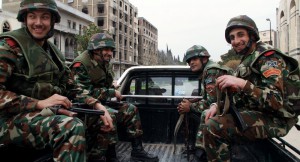 Missiles have been raining down on rebel held areas of Syria’s Aleppo, causing widespread destruction that has overwhelmed rescue teams, as the Russian-backed Syrian army prepares a ground offensive to retake the city.

The intensity of the bombardment, which also included artillery barrages and barrel bombings by helicopters, brought new misery to the estimated 250,000 civilians trapped under siege by the army.

The escalation came after US Secretary of State John Kerry failed to reach agreement with Russian counterpart Sergei Lavrov on terms to salvage a failed ceasefire, although he said he was ready to try again later on Friday.

The Syrian Observatory for Human Rights, a Britain-based monitoring group, said Russian warplanes were participating in the raids alongside regime aircraft.

Ammar al Selmo, the head of Civil Defence Rescue Service in opposition-held Aleppo, said three of its four centres in Aleppo had been hit.

“Today the bombardment is more violent, with a larger number of planes.”

The Observatory said at least 10 people were killed in the strikes, two of them children, but said more dead were feared buried under the rubble.

The Observatory said there were at least 40 air strikes since midnight.

The bombardment came a day after the Syrian army announced an offensive to recapture east Aleppo, which has been held by the rebels since mid-2012 but has been surrounded by government forces since July.

The army urged civilians to distance themselves from “the positions of terrorist groups” and pledged that fleeing residents would not be detained.

A high ranking military source confirmed that the bombardment was in preparation for a ground assault.

He said reinforcements had already been brought to Aleppo.

The US-Russian agreement marked their second attempt this year to halt the war.

It was supposed to bring about a nationwide ceasefire, improve humanitarian aid access, and allow a joint US-Russian effort against jihadist groups including Islamic State and the Nusra Front, long Al Qaeda’s Syrian wing.

The Thursday talks broke up after Russia refused US demands that it promise to immediately ground the Syrian regime’s air force.

“We cannot continue on the same path any longer,” Mr Kerry said, saying “credibility” had to be restored to the process.

The conflict in Syria has cost more than 300,000 lives and displaced over half the country’s population since it erupted in March 2011.

In the latest bid to relaunch peace talks, Mr Kerry and Mr Lavrov announced a ceasefire on September 9, with Moscow responsible for forcing government troops to stand down and allow in UN aid convoys.

Washington was supposed to pressure rebel forces to respect the truce and distance themselves from jihadists, but the ceasefire fell apart acrimoniously and the Syrian army declared it over on Monday.

In Damascus, an analyst close to the regime said it was no coincidence that the Aleppo assault began as the talks in New York broke down.

“The Americans must understand that so long as they don’t implement their commitments, particularly for the rebels to distance themselves from… (jihadists), the Russians and the Syrian army will advance.”