You are here: Home / Africa / Minors used in explosive attack in Cameroon 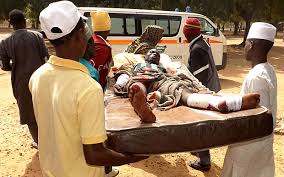 Two girls that carried explosives died in the Cameroonian northern locality of Bodo, after the lethal charge exploded, causing three other fatal victims, according to reports by local media outlets.

When the minors stopped at a check point and the search began, both exploded and wounded several people that were close, said the capital’s newspaper La Nouvelle Expression.

The explosions were attributed to commando groups of the terrorist organization Boko Haram, which is losing some of its most important operational bases in Nigeria and spread throughout the bordering countries of its native soil to perpetuate fear in the minds of the populations.

As part of that strategy, the extremist group uses youths and women frequently as suicide soldiers. All of them carry explosives tied to their bodies and blocked with chains and pad locks to prevent them aborting the actions.

In the case of boys and girls, most of them previously kidnapped from the displaced population, they are forced deceitfully to carry explosive charges.