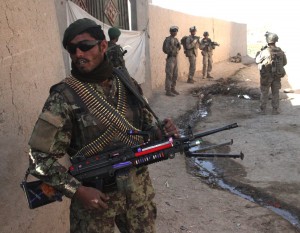 Ministry of Defense has announced that more than 100 Taliban militants have been killed and wounded in newest security operations in the country.

A statement issued by the ministry on Thursday morning states that the operations were carried out in the jurisdiction of Kunar, Maidan Wardak, Ghazni, Logar, Paktia, Kandahar, Zabul, Helmand, Ghor, Farah, Baghlan, Sar-e-Pul, Kundoz, Faryab and Takhar provinces in the past 24 hours.

According to the statement, 78 militants were killed, 36 wounded and 2 others detained during these operations.

The statement further states that eight soldiers from the Afghan National Army (ANA) also embraced martyrdom by landmine explosions and insurgent fire during these operations.

Afghan security forces have been busy in several large-scale military operations against Taliban and other militant groups in parts of the country.

During these independent operations, Afghan forces have retaken areas that were under Taliban control for many years.

Afghan forces launched independent military operations against insurgents after taking full charge of security from NATO-led security forces at the beginning of this year.