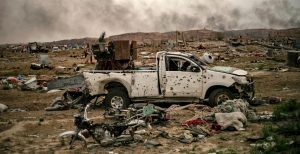 Iraqi military intelligence announced on Wednesday that a notorious leader of the Islamic State militant group and four of his aides were killed during a military operation in Salahuddin province, north of Iraq, like reported by iraqinews.com.

“Troops of the Iraqi Military Intelligence Directorate, in cooperation with the 88th brigade of the Popular Mobilization Forces and the Iraqi Air Force, carried out a military operation in Hamrin Mountains in Salahuddin, leaving an IS leader and four of his aides dead,” Alghad Press quoted the directorate as saying in a press statement.

The IS leader was identified as Talib Garw al Azzawy, the directorate said.

The troops also destroyed their terrorist hotbeds, added the statement.

Iraq declared the collapse of Islamic State’s territorial influence in November 2017 with the recapture of Rawa, a city on Anbar’s western borders with Syria, which was the group’s last bastion in Iraq.