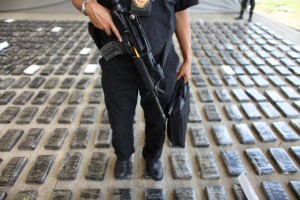 Six men of Somali descent arrested in Minnesota for trying to join up with the Islamic State group became the latest troubling sign of the extremist network’s reach into the Western hemisphere. Despite Department of Defense claims that the group is weakening in Syria and Iraq, its ability to capture the allure of those based in the West, like these men who reportedly recruited one another, remains as strong as ever.

Whether or not the Islamic State group could carry out an attack here or just recruit those from the Western hemisphere remains unknown. But similar concerns are brewing on the other side of U.S. borders.

Nasser Mustapha has heard rumors throughout his native Trinidad of men distributing recruiting videos for the Islamic State group, also known as ISIS or ISIL, and propagating its so-called holy war in Syria and Iraq.

“I was really shocked to hear that,” says Mustapha, a senior lecturer in sociology at the University of the West Indies and an expert on security in the region. “When I first started hearing about ISIS, I really, honestly felt that people from these parts, people from the West would be smarter or more mature to think of going there. When I actually started to see reports of people from the Caribbean actually going there, I was more surprised.”

People who don’t have attachments to family, community or religious groups in the region are particularly vulnerable, Mustapha says, adding he agrees with concerns expressed by national security officials in the U.S. that anyone with nefarious intent may find the regional access they need through the ever advancing drug trade in Central and South America.

Criminal organizations trafficking drugs throughout this part of the world have made sophisticated advancements in moving cargo – and people – throughout the region. Top leaders within the U.S. military now believe extremist networks like the Islamic State group already have designs on capitalizing on these routes.

Marine Gen. John Kelly, commander of U.S. Southern Command, told Congress last month that as many as 100 people have left their native Caribbean homes bound for Syria and Iraq to join the Islamic State group’s cause. While they’re in Syria, he said, “they get good at killing, and pick up some job skills” such as working with explosives and beheading enemy fighters for propaganda purposes.

“If they went over radicalized, one would expect they’d come back at least that radicalized,” Kelly said.

He was not aware of any direct plans at the time to use these fighters to attack the U.S., but their circumstances represent a troubling trend. Kelly said most of the countries from which these intrepid fighters hail, such as Suriname, Jamaica, Venezuela and Trinidad and Tobago, have limited to no intelligence or law enforcement infrastructure to hunt them down. Some extremists may even benefit from government corruption to maintain their cover.

These countries have small but established Muslim communities, accounting for 5 percent of Trinidad and Tobago’s population and almost 20 percent in Suriname.

“It’s definitely a concern,” says Chris Zambelis, an expert on extremism in the Middle East with the Jamestown Foundation, who has studied potential links between these groups and the Caribbean. “These little things should warrant closer consideration. In terms of being a wide movement, or a wider concern among the broader Muslim community, there’s really no evidence of that. Compared to what you’re seeing in Europe, for example, with people traveling to Syria in streams, I’ve never seen anything like that in Latin America or the Caribbean.”

“The word ‘potential’ is really important here. In Latin America and the Caribbean you have weak institutions and very corrupt political vacuums. It’s an easy place for nefarious actors of all stripes to operate.”

There have, however, been instances of militarism among these Muslim communities. In July 1990, Muslim political group Jamaat al Muslimeen infamously tried to launch a coup d’etat against the government in Trinidad and Tobago. The six-day standoff resulted in members of the group surrendering and ultimately being tried for treason.

Earlier this month a Jamaican teen was arrested in Suriname amid claims he sought to join Islamic extremist fighters. Local authorities say the 16-year-old was trying to fly to the Netherlands and then to Turkey – a common point of entry into Islamic State group-controlled areas in Syria.

Kelly and other defense leaders claim budget cuts and downsizing to the U.S. military, combined with a priority for spending on the wars in Iraq and Afghanistan, have sapped the resources they need to hunt down insurgents like these, and to embolden friendly militaries who wish to do the same. Kelly told Congress in March he relied on the FBI, CIA and other law enforcement entities to try to track down networks before they become a problem for the U.S.

American spies are, however, faced with an almost insurmountable task for a no-go zone like Syria: It’s difficult but possible to track fighters as they come and go from the war zone, but what they do once they’re there, and to which groups they swear allegiance in what has become a veritable cauldron of different extremist groups, continues to befuddle U.S. intelligence.

Their potential ability to enter the U.S. from other nations in the region remains an issue. Thousands of federal agents have had some success protecting the northern and southern land borders from smugglers and other unauthorized entries, but vast ocean routes represent another opportunity for traffickers facing comparatively little oversight. Coast Guard officials have previously said the number of ships available to stop illegal trafficking was cut in half to just four, to cover a region roughly 12 times the size of the continental U.S.

And organizations that smuggle drugs in the region are growing increasingly more sophisticated.

The FARC, considered one of the world’s most dangerous guerrilla organizations and prolific drug smugglers, has developed disposable submarines that can transport 8 tons of cargo more than 1,000 miles undersea. Upon reaching their destination, the advanced vehicles can be scuttled and sunk, making it almost impossible for the U.S. military, intelligence or law enforcement infrastructure to identify and stop them.

“This was designed to move cocaine,” said Navy Adm. Hernando Wills Velez, commander of the Colombian armada, while speaking at the annual Sea-Air-Space conference in Maryland this month. “These kind of artifacts can be used for whoever knows – weapons of mass destruction, illegal trafficking of migration, et cetera.”

The smugglers have invested millions of dollars in steadily improving the quality of these submarines, including hiring Russian naval engineers to impart some of the technology, according to a 2014 analysis from a U.S. Army research office.

Velez presented a picture of one such submarine, which he says was built in the jungles of Colombia. The FARC produced it in roughly six months, he said, and through Colombia’s unique geography could launch such vessels into either the Pacific Ocean or the Caribbean Sea.

Its range could allow the submarine to reach Mexico, or as far north as West Palm Beach, Florida. And its potential represents a serious problem for the U.S.

“This is completely outside the bounds of any government control,” says U.S. Coast Guard Vice Adm. Charles Michel, deputy commandant for operations. He has been warning for years about the threat posed by these devices, particularly if a group even more nefarious teams up with FARC to transport money, drugs, weapons or even people.

“There are vulnerabilities and pathways down there,” Michel says. “They’re well-trodden by narco traffickers, human smugglers, any other types of people who operate in that area. Sometimes with impunity or even with corrupt government cover.”

The American response may also be misguided. U.S. bureaucracy tends to separate the phenomenon of drug trafficking from extremist insurgencies, and drug traffickers from terrorist networks, says Bob Killebrew, a former special operations Army officer who now specializes in Central and South American security issues at the Center for a New American Security.

“There are plenty of indications that’s not true,” says Killebrew. There are increasing reports of Iranian interest in South America, including through Lebanese Hezbollah, the militant political party it supports. Iran has also reportedly partnered with elements of the Venezuelan government, as well as the FARC.

The potential for disaster from the Islamic State group is myriad. The network, originally an off-shoot of al-Qaida before it was disowned for being too extreme, has successfully attracted recruits from the U.S., Europe and other Muslim countries through the allure of a supposedly pure and hard-line caliphate designed along an ancient interpretation of Islamic rules. Through masterful use of social media and electronic publications, the group encourages its followers to adopt “lone wolf” attacks, or those planned and orchestrated without any outside support.

“You can’t wait for this stuff to come to the United States,” says Michel. “Not only is that damaging our system, it gives away the tactical advantage that we have.”