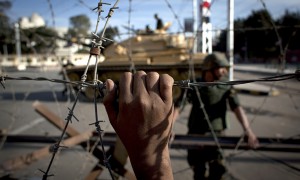 Militants killed three people, including two police officers, in an assault against a security checkpoint in Egypt’s Sharqia province on Sunday.

Police say the attackers rode motorcycles and opened fire on the checkpoint, located in the city of Faqous. Four civilians were injured in the attack, and a local farmer was killed.

The incident comes amid a rising level of militant attacks in recent weeks and among a general trend of extremist violence following the ouster of former Egyptian President Mohamed Morsi in 2013.

On Thursday, 10 people, including seven police officers and three civilians, were killed in an explosion during a raid by security forces on a suspected militant hideout in Giza.

Velayat Sinai, previously known as Ansar Bait al-Maqdis, pledged allegiance to Daesh in November 2014. The Egyptian army has long been engaged in military operations against the militants in the volatile Sinai region, which has been under a state of emergency since October 2014.

The latest terror attack came on the eve of the fifth anniversary of the January 25, 2011 uprising that toppled Egypt’s longtime dictator Hosni Mubarak.