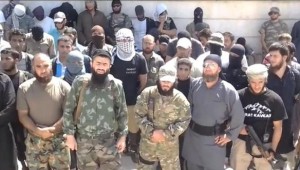 A report about foreign terrorist fighters by the UN Security Council Counter-Terrorism Committee notes that senior commanders of the Islamic State of Iraq and the Levant (ISIL) include Chechens from Russia and militants from Central Asia.

Many foreign terrorist fighters from Central Asia enter Syria via Turkey while others cross poorly patrolled borders of Afghanistan and Pakistan and receive training in terrorist training camps in North Waziristan.

The report says there are about 30,000 “foreign terrorist fighters” currently involved in jihadi conflicts and they are “travelling from more than 100 member states”.

The number of fighters may have increased by more than 70% worldwide in the past nine months or so, the report says, adding that they “pose an “immediate and long-term [terrorist] threat”.

The sudden rise, though possibly explained by better data, will raise concern about the apparently growing appeal of extremism.  The geographic spread of states touched by the phenomenon has expanded, too.

The report notes continuing problems with understanding the processes of radicalization, but says, despite a concentration on the internet, social networks in conflict zones and western cities play a key role.

“Those who eat together and bond together can bomb together,” the report says.

Meanwhile, the Counter-Terrorism Committee’s (CTC) on November 25 will hold an open meeting with research institutions from around the world to analyze and discuss emerging terrorism issues and trends, particularly pertaining to foreign terrorist fighters.