You are here: Home / Mediterranean / Militant cells are carrying out more brazen attacks across Egypt 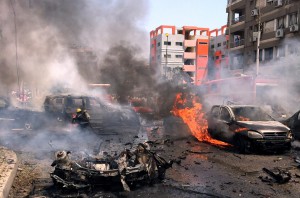 A recent string of militant attacks on high-profile targets across Egypt has underscored a growing threat: the fragmented jihadist groups now competing for influence over this country’s Islamist insurgency.

Since June, Egyptian insurgents have used car bombs, suicide attacks, a prominent political assassination and the beheading of a foreign oil worker to terrorize the country. The attacks have marked the most intense period of militant activity since the homegrown insurgency began two years ago.

Instead of a single group, a cluster of independent but increasingly dangerous cells linked to al-Qaeda and the Islamic State have carried out the violence, security experts say. And rivalries between the jihadist groups are expected to spur more attacks.

At least two factions have launched attacks under the Islamic State banner, including a new cell that claims to be operating for the powerful jihadist movement in Cairo. In July, a former army officer announced that his own al-Qaeda-linked group would battle the government. Egyptian officials suspect the former special forces officer, Hisham al-Ashmawy, in two major attacks in June and in a deadly attack on government forces at an army checkpoint last summer.

The army expelled Ashmawy in the mid-2000s after he showed signs of religious radicalization, according to accounts from security officials in the Egyptian press. Now his military training is helping the insurgents, officials say.

“There has been a spread of terrorism both geographically and ideologically across Egypt, and it’s a real problem for the country,” said Zack Gold, visiting fellow and Sinai expert at the Tel Aviv-based Institute for National Security Studies.

“There are multiple and competing jihadi strains in Egypt that are all moving in the same direction. All have similar styles and targets,” Gold said. If they continue to expand, “they will compete with each other for supporters, funding and recruits,” he said. “And this will drive more and larger attacks.”

Egypt has a long and violent history of Islamist militancy, including a jihadist insurgency in the 1990s that the state eventually vanquished. When the president was ousted in a popular uprising in 2011, however, many of those same militants either escaped or were released from jail. Some formed Islamist political parties, but others headed to Egypt’s Sinai desert, where Bedouin tribesmen had routed police during the revolt.

The Sinai Bedouins, who maintain a distinct dialect and culture from mainland Egyptians, had long complained of discrimination and neglect at the hands of the state. The government, in turn, viewed the Bedouins with suspicion and treated the Sinai population as a security threat.

So in the chaos after the rebellion began, the Bedouins in North Sinai took the opportunity to banish security forces. The lawless desert was a prime spot for the jihadists to train, smuggle weapons and begin staging attacks on Israel. Some tribesmen didn’t have the power to stand up to the militants. In other cases, young Bedouin men joined the militant groups.

They eventually coalesced into a single movement called Ansar Bayt al-Maqdes, which later declared itself the “Sinai Province” of the Islamic State.

But it was the 2013 military coup and bloody state crackdown on the Islamist opposition that propelled the insurgency into its current — and more deadly — form. The Sinai-based jihadists shifted their focus from Israel to Egypt, eventually helping kill hundreds of police and soldiers they declared apostates for murdering fellow Muslims.

Ashmawy used his military training and combat experience to help Ansar Bayt al-Maqdes launch some of the more devastating attacks. In addition, the militants recruited police and army informants who alerted them to security forces’ movements, officials said.

“What the state hasn’t faced before are groups that have this same level of sophistication and determination” to carry out attacks, said Mokhtar Awad, research associate at the Center for American Progress. Authorities also believe that Ashmawy masterminded the July 2014 assault on an army checkpoint in Egypt’s remote Western Desert, which killed more than 20 soldiers, Awad said.

“That was the very first time a military checkpoint was actually overrun,” Awad said of the desert attack. “The logistics must have been insane to be able to carry that out. And Ashmawy knows the area very well.”

Ashmawy split with Ansar Bayt al-Maqdes when the group joined the Islamic State as its “Sinai Province,” Gold and Awad said. The reasons are unclear, but media reports at the time said Ashmawy opposed the Islamic State’s harsh tactics against civilians in Iraq and Syria.

Egyptian officials say they believe Ashmawy ordered a failed suicide attack on a tourist site in Luxor and the assassination of state prosecutor Hisham Barakat in Cairo in June. In that attack, a powerful car bomb targeted Barakat’s vehicle convoy outside his home, fatally wounding the prosecutor and shattering windows in the neighborhood.

Those operations were followed in July and August by massive car bombs outside the Italian consulate in Cairo and the internal security headquarters in a nearby suburb. The Islamic State swiftly asserted responsibility for both attacks. Analysts say they believe a pro-Islamic State cell is also operating in Cairo independently of the group’s affiliate in Sinai, which is separated from mainland Egypt by the Suez Canal.

A loyal Islamic State cell in Cairo, Awad said, wouldn’t necessarily need to coordinate with their fellow militants in Sinai. And according to Gold, the presence of Islamic State operatives in Cairo adds to the image of an Egyptian state under siege.

A bigger threat, Awad says, is if either Ashmawy or the Islamic State begin recruiting more widely among the country’s disaffected Islamist youth.

“That’s the real measure of whether or not this jihad can be an existential threat to the Egyptian state,” Awad said.