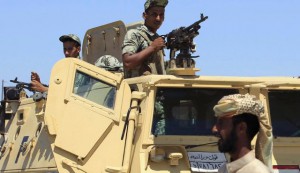 The two attacks, which also wounded 11 soldiers and several civilians, come as Egypt battles a growing insurgency in the northern Sinai, which borders Israel and the Gaza Strip.

Attacks mainly targeting Egyptian security forces have spiked since the 2013 military overthrow of Islamist President Mohammed Morsi following massive protests against his divisive rule. Most of the biggest attacks have been claimed by a Sinai-based outfit that pledged allegiance to the Islamic State group last year.

The security officials spoke on condition of anonymity because they were not authorized to brief reporters.