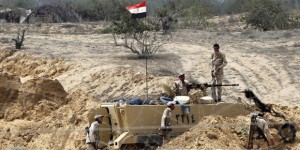 In one attack, fighters ambushed a military checkpoint near the town of Sheikh Zuweyid, firing several mortar shells that killed one conscript and wounded a soldier, the officials said.

In another attack, attackers detonated a bomb by remote control as an armored vehicle passed, wounding four soldiers near the city of Rafah, which borders the Gaza Strip, said the officials, who spoke on condition of anonymity because they were not authorized to speak to journalists

The long-restive northern Sinai has seen a spike in attacks targeting security forces since the military overthrow of Islamist President Mohammed Morsi in 2013.

Sinai-based militant group Ansar Beit al-Maqdis, or “Champions of Jerusalem,” which has pledged allegiance to the Islamic State group, has claimed responsibility for most of the attacks in the province. In a video posted online Monday, the group, which now refers to itself as the Sinai province of the Islamic State group, purportedly showed a man they said Egyptian security agencies planted in the group. The video shows the man digging a grave and a masked member of the group then shooting him in the back of the head.

Previous videos of the group purportedly showed them killing alleged spies and corresponded with reports from the Sinai about similar killings.