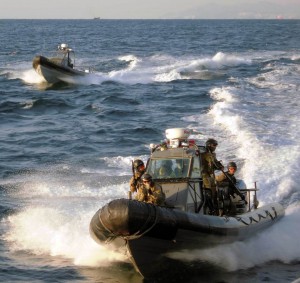 The EU and single EU countries will be allowed to intervene in Libyan waters against boats seeking to smuggle migrants and refugees into Europe, according to a resolution submitted at the UN, the Associated Press reported.

The text authorises the EU and member state to “employ all necessary means”, in UN jargon, military action, “to contrast human traffickers and migrant smugglers”.

The resolution condemns “repeated tragedies resulting in the loss of hundreds of lives”.

It stresses the need for “an international response to address the issue at the heart and prevent” exploitation of human beings by traffickers.

The draft authorises naval operations by the EU and single countries to inspect suspect vessels and provides that they can be seized if there is confirmation that the vessels are used “for migrant-trafficking from Libya”.

This is a chapter 7 resolution as it entails the use of force as a measure of last resort and authorises the inspection, seizure and destruction of boats for a year.

According to diplomatic sources, quoted by AP, because of the different laws applied in Europe, Italy can already seize vessels, but Germany and the UK, whose ships are part of European operations, will first need approval by the UN Security Council. The resolution was submitted at the UN Security Council during a closed door session.