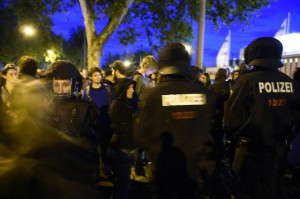 A mass brawl involving around 200 refugees from Afghanistan and Syria broke out on Wednesday night at an asylum centre in Hamburg which has been beset by problems.

The Max-Bahr Market in Bergedorf in southeast Hamburg has been used as refugee accommodation for less than a week, but has already seen a hunger strike and now a mass brawl.

When 600 refugees moved into the empty market hall on September 27th there was not a single bed in the building, the Hamburg Morgenpost (MOPO) reported at the time.

Around 100 refugees sat on the footpath outside the building as a mark of protest, with some complaining that the building had not been cleaned.

Parents were angry that there was no separate area designated for them to stay with their children.

Within hours around 100 people had gone on hunger strike, protesting against the poor conditions. Among them was a pregnant woman.

On Sunday there was already sign of tensions developing when police reporting scuffles between 25 refugees, resulting in two men being lightly injured.

In Wednesday night’s violence, 200 refugees were involved in the fight, which according to one witness broke out after a disagreement over use of the shower facilities.

Representatives of the fire services told MOPO that some of those involved used iron bars ripped from beds, as Afghan and Syrian refugees fought against each other.

Around 50 police vehicles rushed to the centre to bring the situation under control.

This latest escalation is part of a pattern of violence breaking out at refugee accommodation in recent days.

On Monday in Baden Württemberg a large police presence managed to calm an argument between residents of a centre from several different nationalities.

Meanwhile on Sunday in Hesse, a fight between 300 Albanians and 70 Pakistanis led to 14 injuries at a food hall.