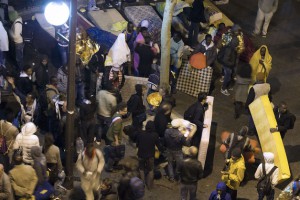 Tents and mattresses, open-air kitchens, cries for help, shows of exasperation: at the heart of the City of Lights, makeshift migrant camps are mushrooming, one of the latest consequences of the raging conflicts in Africa and the Middle-East.

Since the start of the year, European cities have been struck by an unprecedented influx of refugees, overwhelming local authorities while the burden of sharing asylum seekers fleeing war, human rights violations and starvation is fueling tension among European Union members.

The French government was to announce Wednesday steps to increase capacity to deal with arrivals that have swamped Paris authorities in recent months.

Paris Mayor Anne Hidalgo’s staff has been struggling to contain unauthorized camps as about 350 undocumented migrants have settled in a park in the 18th district, in northeast Paris, and close by Austerlitz train station, closer to the Seine river, in recent days.

Migrants are seeking new homes after an initial group of 470 were dislodged by police forces from a bridge behind Gare du Nord station earlier this month, getting worldwide press coverage. Most are from Eritrea and Sudan, according to the city of Paris. Some crossed the Mediterranean on rafts to reach European shores.

Hidalgo has called for a facility to be set up in Paris. ‘They can’t stay out on the streets at night,’’ she said on June 9.

Yet the French administration fears this could fuel political tensions and encourage more illegal immigration into the French capital, after an official camp near the northern town of Calais did just that and had to be shut down following riots in 2002. Now, thousands of migrants attempting to reach the U.K. sleep in forests and wasteland around the northern city, waiting for an opportunity to cross the Channel.

Instead, the government plans to offer more temporary accommodation for asylum seekers, improve information on procedures and crack down on illegal immigration rings, AFP reported on Tuesday. The steps are aimed at preventing refugee camps and the safety and hygiene issues that they raise, Prime Minister Manuel Valls said.

Italy, where most migrants first arrive in Europe, this week threatened to issue travel permits to let them move on to neighboring European Union countries. So far, the French police has been stopping them at the border, close to the town of Ventimiglia.

In the meantime in Paris, locals have been shocked by the migrants’ dire situation. Protests erupted last week to demand more accommodation for refugees after the police tried to dismantle new settlements.

Over the last weekend, about 150 people, a majority of adult men and a handful of women and young teenagers, moved with makeshift tents and mattresses into the Eole gardens close to Montmartre hill and its famous Sacre-Coeur Church.

The new location is a clear improvement on Gare du Nord: the square has two toilets and a fountain. Neighbors and activists have put up signs requesting sheets, old mobile phones, shoes, clothes and rough sacks. An open-air kitchen has been set up to serve coffee and hand out food as locals turn up with dishes, pizzas and sandwiches.