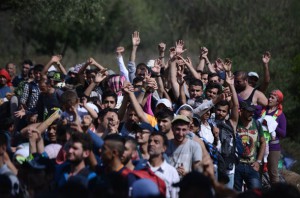 There are people who are now in Turkey, buying false Syrian passports because they have obviously realised that it is a windfall since Syrians get asylum in all member states in the European Union

Disgraceful people smugglers are using Facebook to sell thousands of fraudulent papers to asylum seekers who are looking to enter Britain for better job opportunities and benefits.

Express.co.uk previously revealed migrants fleeing poverty in north Africa and the Middle East are dumping their own documents, and instead posing as refugees fleeing war and persecution in Syria.

The latest abhorrent development in the human trafficking underworld was revealed when a reporter posed as an Egyptian migrant and called a number found on a Arabic Facebook page, as part of a undercover Telegraph investigation.

He spoke to a sick people smuggler who offered him a fake Syrian passport for £1,000, along with travel from Turkey to Greece costing him another £800.

Syrian people making the perilous journey across dangerous seas are angry the worrying trend could have an impact on their plight to get into Europe.

Fights have broken out between real and fake Syrians, with many using stones and bottles to attack one another on migration routes.

Aida, 28, from the southwestern Syrian town of Deraa, said: “This is not fair.

“We (Syrians) were told we would have priority. They are using this opportunity that Europe gave to our countrymen to make gain at our expense.”

Disturbing recent figures from the EU reveal that only one in five migrants are genuinely Syrian, but 90 per cent of those trying to cross the border claim they are Syrian because they think it is the surest route to gaining asylum.

The Arabic version of Twitter even has an “expose fake Syrians” hashtag, which is one of the most trending topics in the war-torn country.

The trend has increased fears the well-trodden migrant route could be exploited by terrorists who pose as refugees in a bid to make it into Europe and carry out an attack.

German police arrested a Moroccan-born jihadist, who had used fake documents to pose as a desperate refugee.

The head of Europe’s border agency Frontex described the abhorrent trend of buying fake documents as a “windfall” for economic migrants, amid the revelation dubious markets selling fake Syrian passports have sprung up across Turkey.

Fabrice Leggeri said: “There are people who are now in Turkey, buying false Syrian passports because they have obviously realised that it is a windfall since Syrians get asylum in all member states in the European Union.

“People who use false Syrian passports often speak in Arabic. They may originate in North Africa or the Middle East, but have the profile of economic migrants.”