You are here: Home / Europe / Migrants are disguising themselves as Syrians to enter Europe 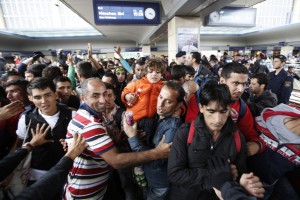 Moving among the tens of thousands of Syrian war refugees passing through the train stations of Europe are many who are neither Syrian nor refugees, but hoping to blend into the mass migration and find a back door to the West.

There are well-dressed Iranians speaking Farsi who insist they are members of the persecuted Yazidis of Iraq. There are Indians who don’t speak Arabic but say they are from Damascus. There are Pakistanis, Albanians, Egyptians, Kosovars, Somalis and Tunisians from countries with plenty of poverty and violence, but no war.

It should come as no surprise that many migrants seem to be pretending they are someone else. The prize, after all, is the possibility of benefits, residency and work in Europe.

Leaders in Germany and other European states say they are prepared to award asylum to legitimate refugees from countries such as Syria, Iraq and Eritrea, but they are issuing more strident warnings they will reject many of the economic migrants streaming over their borders.

“What we see here has nothing to do with seeking refuge and safety,” Austrian Interior Minister Johanna Mikl-Leitner said Monday. “It is nothing but opportunism.”

Many of the asylum seekers tell journalists and aid workers they are from Syria, even if they are not, under the assumption that a Syrian shoemaker fleeing bombed out Aleppo will be welcome, while a computer programmer from Kosovo will not be.

It is common knowledge on the migratory route that some who are not from Syria shred their real passports in Turkey and simply fake it.

A couple of reporters, one a native Arabic speaker, who wandered through the bahnhofs in Vienna found plenty of newcomers whose accents did not match their stories and whose stories did not make sense.

Swimming in the river of humanity are shady characters, too, admitted criminals, ISIS sympathizers and a couple of guys from Fallujah, one with a fresh bullet wound, who when asked their occupation seemed confused.

“Army,” said one. His friend corrected him. “We’re all drivers,” he said.

The refugees report that a forged Syrian passport can be bought on the Turkish border for as little as $200. A reporter for the Daily Mail bought a Syrian passport, ID card and driving license for $2,000 in Turkey under the name of a real man who was killed in the conflict.

An Austrian security official, who spoke on the condition of anonymity, said there is a thriving black market for Syrian passports in Croatia, Serbia, Hungary and Austria, too.

There are enough pretenders that true Syrians complain about ersatz Syrians.

Syrian war refugees said that Europe offered a welcome to them but that opportunists will quickly wear out the continent’s welcome if they haven’t already.

“Look at these people, what are they doing here? We are the ones who are fleeing from war and slaughter, and now these men are taking away our space,” said Mustafa, 62, from Syria. He had stopped to help a woman who had fainted, letting a group of Afghans use the opportunity to cut in line.

“I don’t understand — we thought the Europeans invited Syrians like us to come,” said one of Mustafa’s companions.

Blending in with real refugees

At Vienna Westbahnhof, a tight clutch of men are queuing at the ticket windows. Days of rough travel lay behind them. All have one aim: Germany.

When asked by a reporter where they were from, the men answer, “We are from Syria.”

When a reporter switches to the North African dialect, the men laugh nervously. “We are Algerians,” they admit.

Hamza, 27, is from Algiers. “I am illegal, not refugee,” he said. “In my country, the only thing you can do there is either drugs or crimes. So I was in prison several times, for drugs, also for trying to kill another guy.”

Hamza and his mates went to Turkey because the smuggling route to Sardina has been shut down.

“We flew to Istanbul and then took a bus to Izmir. There we destroyed our passports and just mixed with the Syrian refugees. We then took the boat from Izmir to Greece. From there to Macedonia, Serbia, Hungary and now we are in Vienna,” he said.

Did Hamza feel guilty? Not at all.

“It’s really easy now to travel with these refugees. We received food and shelter, and a nice welcoming from people so far.”

“So when someone asks us, where do you live? We say Damascus. Where are you from? Answer Syria.”

An Austrian aid volunteer at the train station, Hisham Fares, is of Libyan descent and has worked as an interpreter helping asylum seekers find their way in the present confusion.

“There are people who are trying to benefit from the situation. I’ve met Egyptians who claimed they were Syrians, but the dialect is Egyptian. I’ve also met people from Morocco, Algeria, Tunisia or Libya who all are now flying to Istanbul and then go to Izmir where they destroy passports,” Fares said. “I’ve also met Palestinians who live in camps in Lebanon and now claim they were from Yarmouk camp in Syria. Many of them said they have family in Germany and just use this situation to finally get asylum.”

“Most of these people say they’ve lost their passports,” Fares added. “The sad thing is that those Syrians who really are fleeing war will be the ones paying the price.”

Another group of men, standing in line for free food, were speaking English among themselves but with an Indian accent.

One said his name was “Hassan.”

“We grew up in Syria, our fathers worked there for many years,” Hassan said.

He had worked in Syria, in a bank, in Damascus, he said.

When a reporter spoke to them in Arabic, the men smiled and said, “No Arabic, only English.” Asked where they lived in Damascus, they couldn’t really say.

They excused themselves and wandered away.

Confronting a surge in migrants falsely claiming to be from war-torn nations, European authorities are seeking to bolster screening efforts, particularly at gateway nations such as Greece and Italy.

Ewa Moncure, a spokeswoman for Frontex, the European Union’s border agency, said officials are deploying interpreters to assess accents and are using geographic and other questions to weed out pretenders.

“You have interpreters working with officers, and they are asking questions,” she said. “If someone claims to be from Syria and he can’t say what the currency is or what the main street is in Damascus, there are going to be questions about his claim.”

Frontex, she said, is moving to double its staff in Greece in the coming weeks to at least 140 people, an effort that may help the agency to identify more false refugees. Those identified as such, she said, should be detained and processed for rapid deportations.

But Greece has been so overwhelmed by the sheer numbers that many are slipping through.

Most economic migrants and war refugees in Vienna say they have arrived without showing a single document to authorities — nor are they photographed, fingerprinted or subjected to biometric measurements.

It will take months to sort out their stories.