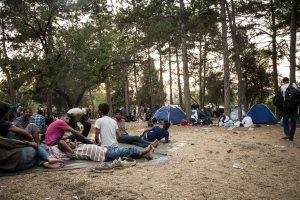 Preventing the arrival of immigrants with no legal rights to the EU is more important, in terms of EU policy priorities among member states, like reported by euobserver.com.

Erkki Koort, who chairs an internal security group at the European Council, representing member states, told MEPs on Tuesday (10 October) that fighting “the facilitation of illegal migration” involves more EU states than any other crime.

“For the upcoming [EU policy] cycle, the areas with the biggest number of member states participating are first [against] the facilitation of illegal migration,” he said.

While he noted the importance of fighting terrorism, he said it shouldn’t act as a distraction against “extremely important aspects of security, notably organised crime.”

The EU Council had in May outlined the same policy priorities when it comes to combatting organised crime but did not rank them in terms of importance.

Koort was discussing the same priorities but in the wider context of the upcoming so-called ‘EU policy cycle’ that stretches from 2018 until 2021.

Part of that assessment stems from a report by the EU police agency, Europol, which in March declared the existence of more than 5,000 international organised crime groups currently under investigation in the EU.