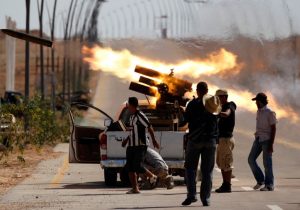 An armed group in the Libyan smuggling hub of Sabratha is being targeted because it began stopping migrant boats leaving for Italy, leading to heavy clashes with groups benefiting from the trade, the head of the group said, according to trust.org.

The fighting over the past two weeks has caused dozens of casualties, displaced hundreds of families, and put Sabratha’s famed Roman ruins at risk.

Migrant crossings from Libya have dropped sharply since July, a change that the armed group, the Anas al-Dabbashi brigade, says is due to its policing of the coast near Sabratha under a deal with the U.N.-backed government in Tripoli.

Brigade leader Ahmed al-Dabbashi, also known as Al-Ammu (the uncle) and described in a U.N. report as one of Libya’s top smuggling facilitators, said the move had led to attacks by rivals smuggling from al-Wadi, an area just east of Sabratha.

“We, al-Dabbashi brigade, had an agreement with Government of National Accord (GNA) to stop illegal migration,” Dabbashi told Reuters by phone in an interview, referring to the Tripoli administration.

“Then we were surprised that after stopping migration the Shuhada al-Wadi brigade started coming at us with their four-by-four vehicles painted in military police colours and their members started wearing military uniforms.

“They started harassing us because we stopped migration and this is bad for them,” Dabbashi said.

A senior Dabbashi member said last week that the brigade’s sudden shift from smuggling to policing was motivated by a desire for legitimacy in the form of police and army jobs for its members. It and the Italian government have denied reports that Dabbashi was paid by Italy to stop the migrant boats.

Dabbashi said the Wadi brigade is aligned with the Operations Room, a force formed to oust Islamic State jihadists from Sabratha last year and that clashes began when Dabbashi’s cousin Abubaker was killed at an Operations Room checkpoint.

Saleh Graisia, an Operations Room spokesman, said clashes erupted because the actions of the Dabbashi brigade and the allied Brigade 48 were “out of control”.

The Operations Room and its allies, which include ultra-conservative Salafists and locals from Al-Wadi, had moved to push “militias” from Sabratha, he said.

“The Room has its own conditions. The top one is that all militias withdraw from the city and hand over their weapons so the city be under legitimacy of the police and army.”

Fighting has led to the evacuation of hundreds of families from central Sabratha, said Essam Krir, head of an association of non-governmental organisations.

Several civilians and at least 13 fighters have been killed, while dozens of combatants have been wounded, according to Dabbashi and Graisia.

Fighting has raged around Sabratha’s hospital and its Roman ruins, a UNESCO World Heritage site. UNESCO’s head appealed for all parties to “ensure the safeguarding of Sabratha’s unique cultural heritage”.

“We have orders to not use heavy artillery for the protection of the ruins,” Graisia said. The Operations Room said on its Facebook page it had taken control of the ruins.

The head of Sabratha’s antiquities department, Mohamed Bojela Rhoma, said because of the clashes, it had not been possible to check a report of the amphitheatre being hit. Pictures posted on social media appear to show surface damage to the monument and empty bullet cases scattered in the ruins.