You are here: Home / Europe / MI5 claim there are 23,000 Islamic terror suspects in UK is ‘tip of the iceberg’ 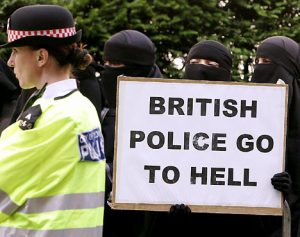 The potential terrorist threat to the UK is far greater than MI5 has estimated, a former intelligence adviser to the government has warned, like reported by news.yahoo.com .

Colonel Richard Kemp said that MI5’s figure of 23,000 “suspects of interest” is likely just “the tip of the iceberg”.

In an interview with BBC Newsnight, the former chair of the Cobra Intelligence Group said the UK is “reaping the horrors” after years of failing to deal with extremism.

“It [23,000] is a huge number, but I don’t think in any way it will cover the full spectrum,” he told the programme. “I think there are probably many, many more that are involved in that type of activity.

“It would seem to me, from my experience of intelligence, that it would be extremely unlikely that MI5, very effective though they are, have got a full understanding of the scale of the problem that exists in the United Kingdom.”

The intelligence services have been under intense scrutiny after three attacks took place on British soil in quick succession.

In particular, questions have been raised as to why police and MI5 failed to monitor London Bridge attacker Khuram Butt, who was known to have links to extremist group al-Muhajiroun.

Anjem Choudary, its leader, has been linked to the recruitment of more than 100 terror suspects, and Butt had appeared in a documentary about British jihadis.

Following the London Bridge attack, the head of Islamic Studies at the Quilliam Foundation, Dr Usama Hasan, said he had reported Butt to the intelligent services.

In a Facebook post, he wrote: “Khuram Butt, the London Bridge terrorist, verbally and physically assaulted me last year on Eid al-Fitr at the One-Eid Muslim family funfair in Goodmayes Park.

“I was with my elderly parents and nine-year-old son at the time, and naturally we were all distressed. I reported him to the police and counter-terrorism police at the time: he was already known to the latter.”

Dr Hasan was one of several to say they had notified authorities about Butt’s extremist views.

After the Manchester suicide bombing, intelligence services said there were dealing with 500 terror related investigations into 3,000 individuals.

Sources confirmed that a further 20,000 individuals were considered “subjects of interest” in the past. However, the period this covers is unclear.