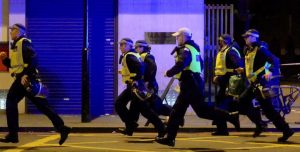 The government of the United Kingdom has admitted that it is aware of 43,000 terrorist suspects– nearly double the number previously revealed by security services.

After the 2017 London Bridge terrorist attack, the British people were informed that there were some 23,000 suspected terrorists being monitored by MI5 — this itself already a significant rise on the 3,000 suspects the government had admitted to knowing about to that point. However, a report has revealed that there are an additional 20,000 people on the government’s watchlist.

The list of “closed” subjects of interest included Salman Abedi, who killed 22 people during the Manchester Arena bombing and Khalid Masood, who ran over pedestrians and stabbed a police constable to death in the 2017 Westminster terror attack. Both terrorists were allowed to slip through the cracks of the surveillance system due to “limited resources“.

In its report, the government claimed that the increased number of terrorists on MI5’s watch list does not necessarily mean that there are 20,000 additional terrorists presently in the country.

“A substantial element of the increase to over 40,000 is the inclusion of individuals who have never travelled to the UK but whose details have been passed to MI5 by foreign intelligence services, in order that MI5 be alerted should they enter the UK,” the report said.

Earlier this year, it was revealed that some 160 convicted terrorists had been released back onto the streets of Britain. The revelation came in the wake of the Streatham terror attack in which Sudesh Amman stabbed two people days after being automatically released from prison.

The attack prompted the government to pass emergency legislation, ending the automatic early release of convicted terrorists. Those convicted of terror offences will now have to serve at least two-thirds of their sentence and be reviewed by a parole board before being released.