You are here: Home / Europe / Merkel says Assad must be involved in Syria talks 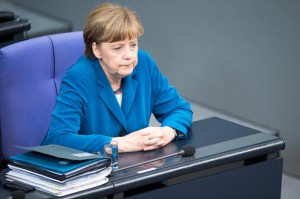 German Chancellor Angela Merkel said on Thursday that President Bashar al-Assad should be involved in any talks aimed at ending the four-year conflict in Syria.

“Fences are no solution to the problem,” Merkel reportedly said at the EU summit in Brussels. “We need to talk more with Turkey and Lebanon, and we also need to find a solution for Syria and Libya. That means also talking to (Syrian President) Bashar al-Assad.”

“We have to speak with many actors, this includes Assad, but others as well. Not only with the United States of America, Russia, but with important regional partners, Iran, and Sunni countries such as Saudi Arabia,” Merkel told a press conference after an EU summit.

The comments by the leader of Europe’s biggest political and economic power come amid increasing signs that Western powers who were once insistent on Assad’s departure may be softening their positions in a bid to end the war.

US Secretary of State John Kerry said on Saturday that although Assad must step down, that need not immediately be upon reaching a settlement to end the country’s civil war.

Russia and the United States launched military talks on the Syrian conflict last week as Moscow increased its build-up of forces in the war-torn country.

But French President Francois Hollande, whose country is set to launch air strikes against Islamic State (IS) fighters in Syria, insisted Thursday that there could be no place for Assad.

“There can be no transition without his departure,” Hollande insisted after the summit.

“The future of Syria will not pass through Bashar Assad.”

Merkel, Hammond, Hollande and the other EU leaders issued a statement after the Brussels summit calling for a new push for peace.

“As regards Syria, we call for a renewed UN-led international effort to bring an end to the war that has caused so much suffering and forced an estimated 12 million people to leave their homes,” the summit statement said.