You are here: Home / MidEastGulf / Mercenaries could help fight the tide of Isis 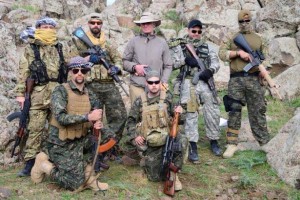 One of the country’s most well-known soldiers has claimed mercenaries could be the West’s key to defeating Isis.

in the world of hired fighters and told the Telegraph that they could be the answer that the US and UK are looking for.

Mann, who ran the mercenary firm Executive Outcomes, credited with stopping rebels in Angola and Sierra Leone uprisings, admitted that he had no plans to start gathering troops into Iraq and Syria, however.

But that doesn’t mean he wouldn’t help if someone asked. “If someone from the Iraqi government said ‘Okay Simon, we have got the money for you to put together a 2,000-strong force’, I would tell them ‘yes, we could probably do something useful’,” he told the paper.

The task for a private company managing the troops would largely be an issue of training and building group spirit.

“With the right training, probably a minimum of two months, you can turn pretty much anyone into good troops, as long as you have good officers and good NCOs.

“After all, if you are a soldier and you are about to go into battle, what goes through your mind? Firstly, you are sh**ing yourself. And secondly, you have to know that you are going to win. No one wants to die pointlessly,” the 62-year-old added.

Other mercenary forces have been successful in pushing back Boko Haram in Nigeria. This demonstrated the fact that hiring fighters could be a viable option for western governments unwilling to send in their own troops.

Mann spent five years in a hellish prison in Equatorial Guinea after helping to orchestrate a coup d’état against the government that failed. He was supposed to serve 35 years but was released in 2009 following a humanitarian pardon.

The episode was detailed in his memoir, Cry Havoc, which he concentrated on writing in the years following his release.