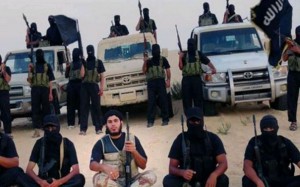 With startling speed, the Middle Eastern terrorist organization known as ISIL has burst into the local news in Western nations, associated with attacks in Paris and now, if indirectly, with the mass shooting in San Bernardino, California.

This might have shocked Americans and Parisians for whom the group was long a distant-sounding threat, but for close observers of the organization, ISIL’s global strategy should come as no surprise. In fact, ISIL has pursued an international expansion campaign from the moment it declared its “caliphate” in June 2014. While the group solidifies its proto-state in parts of Iraq and Syria, it also is expanding its would-be caliphate regionally—and preparing for the apocalyptic war it desires with the West.

To do that, it’s fostering affiliates in Muslim-majority areas and directing and inspiring terror attacks in the wider world. And for the U.S., this means that defeating ISIL will require not just combatting the group in Iraq and Syria, and countering its messaging and recruitment of foreign fighters. It also will require serious attention to ISIL’s growing affiliates in other nations.

How widespread are these affiliates? This is a crucial, if underappreciated part of the challenge ISIL now poses. Our counterterrorism research team has been tracking ISIL’s activity through everything from social media to satellite imagery, and we’ve begun assembling a detailed portrait of ISIL’s formal affiliates in Egypt, Libya, Afghanistan, Pakistan, Yemen, Saudi Arabia, Algeria, Russia and Nigeria. Looking ahead, ISIL also appears to be preparing to establish entities in Bangladesh and Tunisia, where it has launched a spate of attacks, and another in Somalia, where some militants have declared allegiance to ISIL.

Its growth strategy is sophisticated and systematic, much like a multinational corporation expanding by acquisition. Rather than build affiliates from the ground up, ISIL co-opts and changes existing militant groups or networks, some of which have splintered from Al Qaeda. Potential affiliates must consolidate factions, select a leader and present a military plan to ISIL’s leadership for approval, according to ISIL’s own standards. ISIL then chooses whether to establish a wilayat, or province, in the affiliate’s operating area. ISIL’s leaders help these affiliates to become more brutal and effective by exporting military training and expertise. ISIL calls for international recruits to reinforce its strongest partners; it also provides military training and funding to some affiliates.

The relationship benefits both parties. ISIL gains a responsive global network, while the affiliate receives an influx of capabilities and cash.

The affiliates are tremendously damaging to the nations where they take root, either undermining relatively stable states as ISIL did in Iraq, or exploiting governance vacuums to expand, as it did in Syria. The affiliates’ military operations increase regional disorder and create security gaps that will help ISIL grow beyond Iraq and Syria. Affiliate commanders impose brutal forms of Shari’a governance on the local populace, enabling ISIL to claim that it has delivered on its promise of a trans-regional caliphate. ISIL benefits from its affiliates without needing to micromanage their operations.

Not all the affiliates are created equal, though: Some pose a meaningful strategic threat, while others are barely formed. As the U.S. shapes the next phases of its policy against ISIL and its affiliates, it will need to triage by analyzing the international threat posed by each one. Our research suggests they fall into three broad tiers, plus a wild card.

Most dangerous tier: Egypt and Libya

ISIL’s most dangerous affiliates are those that give the group strategic resilience: They’re strong enough that they could help the group survive even if the group were to be wiped out in its home territory of Syria and Iraq. These affiliates can extend ISIL’s global reach, increase the organization’s fighter pool, and provide safe-haven to ISIL’s leadership. They maintain strong ties to ISIL’s network and have demonstrated an increase in military capability since their affiliation with ISIL. Defeating ISIL in the long term requires degrading these affiliates.

ISIL’s affiliate in Egypt, Wilayat Sinai, has already conducted a major act of international terrorism. The group claimed responsibility for downing Russia’s Metrojet flight 9268 over the Sinai Peninsula on October 31, killing all 224 individuals onboard.

The group’s capabilities should not come as a surprise. ISIL has been giving this affiliate training and expertise since July 2014, shortly after declaring its caliphate, when the Egyptian jihadist group formerly known as Ansar Beit al-Maqdis reportedly sent a representative to ISIL’s stronghold of Raqqa, Syria. This envoy pledged allegiance to ISIL and agreed to send ABM members to Syria for military training. ABM exhibited a concrete growth in capability soon after this pledge. The group launched one of Egypt’s deadliest attacks in decades on October 24, 2014, killing 33 security personnel. Three weeks later, ABM formally rebranded itself as Wilayat Sinai, or ISIL’s Sinai Province.

Now ISIL has transferred signature capabilities to Wilayat Sinai, which has steadily increased the frequency, scope and effectiveness of its attacks against Egyptian security forces. In particular, Wilayat Sinai expanded its vehicle-borne IED campaign in the North Sinai in the spring of 2015, increasing its use of ISIL’s signature tactic. VBIEDs require significant expertise to deploy successfully, suggesting that ISIL’s leadership provided Wilayat Sinai with resources and training. Wilayat Sinai also initiated a house-borne IED (rigging a house with concealed explosives) campaign against Egyptian security personnel in the summer of 2015, resembling the “Soldier’s Harvest” campaign ISIS conducted to degrade Iraqi Security Forces in 2013. The group has increasingly claimed attacks on Egypt’s mainland since this past summer, signaling its intent to attack the Egyptian state as a whole rather than just security forces in the Sinai Peninsula.

In Libya, meanwhile, ISIL’s affiliates on the central coast control territory, administer Sharia law, and run militant training camps. These affiliates are exploiting Libya’s civil war to recruit and expand. ISIL initiated operations in Libya through the al-Battar Brigade, a jihadist group that fights with ISIL in eastern Syria. ISIL-trained militants returned home to Libya and pledged allegiance to Abu Bakr al-Baghdadi in October 2014. ISIL subsequently sent several senior leaders to Libya to cultivate the group, including Iraqi Abu Nabil al-Anbari, who recently was killed by a U.S. airstrike.